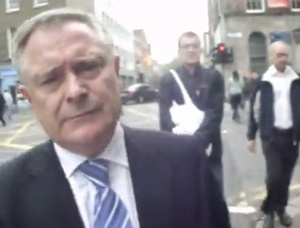 Brendan Howlin gets his Naomi on at Merrion Row and Merrion Street, Dublin, this afternoon.

Stay for the huffy walk.

“Members of Rage against the Regime (RAR) today lodged requests at the Department of Finance regarding the Anglo Tapes.

On exiting the building they encountered Minister (for Public Expenditure and Reform, Brendan) Howlin.

Derek, from Dublin Says NO, recorded RAR,as they tried to question the Minister.

Mr Howlin tried to grab the camera and refused to speak to us. So much for being a voice of the people

Like to see him try that with Ursula Halligan.