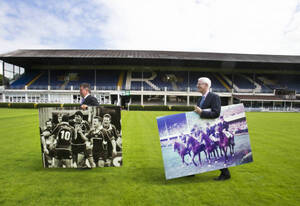 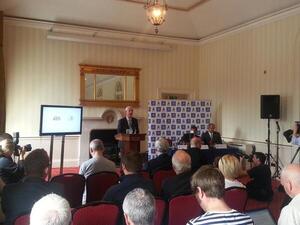 Leinster RFC in a partnership with the RDS this morning details of a new arena to replace the stadium in Ballsbridge, Dublin. (top)

Our Aaron collared Marcus ó Buachalla, (above) Leinster RFC head of communications for a ‘quiet word’.

Aaron: [exasperated] “What fresh madness is this?”

Marcus ó Buachalla: “The RDS Arena is going to be redeveloped by the RDS and Leinster Rugby. The first stage of the process is a worldwide architectural competition to select the best design possible in order to deliver a world class multi-purpose arena details here. We will we see the winning design by December 2014 hopefully.”

Aaron: “When will building work start?”

ó Buachalla: “Allowing for a 12 month planning process, in April 2016. The new RDS Arena be unveiled to Leinster Rugby fans for the 2017/18 season.

Aaron: “Where on EARTH will the games take place while this arena is getting built?

ó Buachalla: “As with any redevelopment, there may be some level of inconvenience but every effort will be made to accommodate all season ticket holders during the construction and no season ticket holder will be without a seat during that phase of the build. Ultimately this is about delivering a world class multi-purpose arena that will be to the long term benefit of all our supporters but our season ticket holders in particular who are our most valued supporters. The new RDS Arena will provide a far superior match day experience for those supporters.”

ó Buachalla:  “…however this will be privately funded by the RDS. There will be no Government/public money.”

Aaron: “So THIS is why ticket prices are going UP?”

ó Buachalla: “No. Leinster Rugby is a partner in this process and we fully support the RDS but we are only an anchor tenant at the RDS. This is being funded by the RDS privately.”

Aaron: “Where does this leave the mascot?”