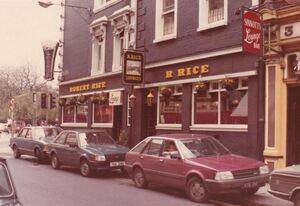 Now the entrance to Stephen’s Green Shopping Centre, at the top of Grafton Street, Dublin.

Rice’s and Bartley Dunne’s [on Stephen Street Lower] first emerged as gay-friendly pubs in the early 1960s. Some believe that it might have been as early as the late 1950s…Rice’s, at the corner of Stephen’s Green and South King Street, was demolished in 1986 to make way for the Stephen’s Green Shopping Centre. While Bartley Dunne’s, on Stephen’s Street Lower beside the Mercer Hospital, was torn down in 1990 and replaced with ‘Break for the Border’.