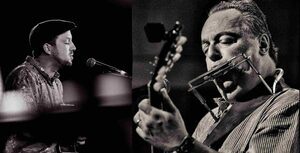 Richard is a Dubliner living in Copenhagen while Richard Ray is a Niagara native, with Corkonian roots, who has moved to Spain.

Last June, in a blues bar in Copenhagen, somebody mentioned to Richard that there was another bluesman out there with a virtually identical name. What was initially idle bar chat turned into a mini obsession and soon an email with the subject ‘Long Lost Blues Cousin?’ was winging its way to Richard Ray. It took mere days for a plan to be hatched — a joint tour of Ireland and Denmark.

The Blues Cousins Tour has conquered Copenhagen already, now they’re on their way to West Cork, via Dublin…

Richard and Richard Ray will play Hackett’s Bar in Schull tomorrow night, at 9pm; Levis’ Bar in Ballydehob on Sunday, at 6.30pm; and Crane Lane, Cork, also on Sunday, at 11.30pm.