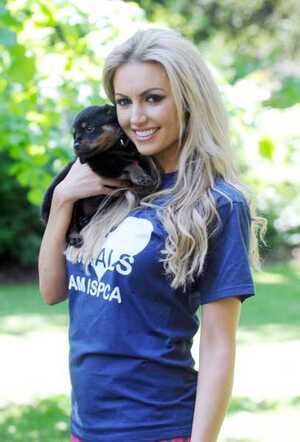 I have a suspicious story regarding Rosanna Davison’s alleged participation in the mini marathon…. I saw her coming out of a house on Leeson street and joining in the race at around 9km. Of course this in itself is not evidence enough as to her lack of running the previous 9km. However – then I tried to check what time she ran, and her name didn’t appear in the finish list. There was a photo of her at the finish and I searched her number to find that the person with that number had run it in 43mins. This I found particularly bizarre since in a newspaper interview she said she ran it in just over an hour. The name associated with the number was Carmel Murray – who just happens to be the ISPCA public relations officer – the charity Rosanna ran for!!
So delving into further detail I looked up Rosanna’s time from 2011 which was 51.54 – making 43mins an almost Michelle Smith-esque improvement of 9 minutes. Also Rosanna posted a photo on twitter showing her `starting’ way back in the joggers section. 43 minutes would basically be impossible from starting so far back with so many walkers etc. to dodge. So my surmise is this:
Carmel Murray started the race in the joggers section but it took about 20mins for her to cross the start line. Her chip was not activated then till abut 3.20pm. She then left the race and ran over to leeson street and gave Rosanna her number. They planned that Rosanna would `finish’ the race in about an hour. But they forgot about how long it took to cross the start line so Rosanna accidentally came in 20 mins early!! And suspiciously didn’t even realise it!!

Should she be stripped of her medal?

Commended for her rather stylish mini-marathon dodging?

Or should Haldeman and Ehrlichman take the fall?

UPDATE: The ISPCA, in a statement to Liveline this afternoon, are adamant that Rosanna ran and completed the mini-marathon in 43 minutes.