Three Royal Marines, known as A, B and C, have been accused of executing a captured Taliban prisoner in Helmand Province in September 2011. They are pleading not guilty to murder.

Marines B and C are accused of being “party to the killing” and “encouraged and assisted” Marine A to commit the murder.

A conversation between them, as they allegedly carried out the killing, was recorded by a camera on one of the marine’s helmets.

Judge Jeff Blackett has released an audio recording [transcript above] and video stills of the incident.

The court martial board has retired to consider its verdict. 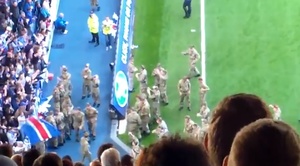 Although it’s getting the classic false equivalency treatment elsewhere it’s worth pointing this out. The Irish Times reports “Videos taken at the game against Stenhousemuir clearly records Rangers supporters singing songs praising loyalist paramilitaries and uttering chants about IRA hunger-striker Bobby Sands. The videos appear to show that some of the 400 soldiers, sailors and Royal Marines, invited to the match by Rangers in a delayed tribute to mark Armed Forces Day, joined in with the singing.”