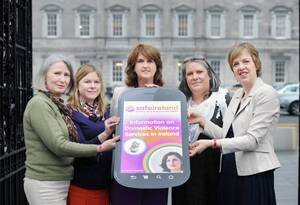 Last year an iPhone version of the app, which lists refuges, care workers, etc, for women in distress, was released