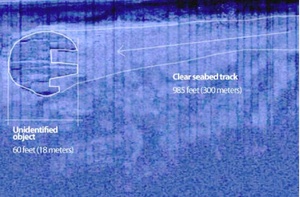 On the sea bed between Finland and Sweden, Swedish treasure hunters claim to have found the remains of a crash-landed UFO after their sonar picked out a large circular object with what looks like a 985 foot long trench dug from the impact.

You see a lot of weird stuff in this job but during my 18 years as a professional I have never seen anything like this. The shape is completely round… a circle.

Those are the words of Peter Lindberg, commander of the Ocean Explorer. He and his team found the strange disc on June 19 2011, at 285 feet below the surface of the Botnia Gulf, which is located somewhere between Finland and Sweden in the Baltic.

Someone really ought to get down there and dredge up that Millennium Falcon at a cost of literally millions.

Is ThIs A UFO On The Bottom Of The Ocean? (Gizmodo)