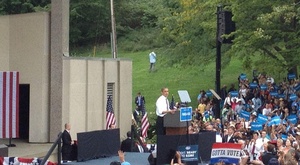 A pic taken yesterday in Cincinnati by Politico reporter Donovan Slack, originally (and gleefully) assumed by Fox News to be a man taking a whizz up the grassy knoll behind Obama, turns out to be a secret service agent on duty.

That’s how they stand, facing away from the president.

Handy enough if you get caught short.