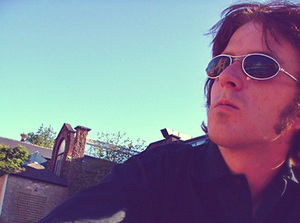 ‘Seriously Hilary’ is an Irish writer based in Belgium.

Austin and I met on New Year’s Day at a Mundy concert. A shy smartass with pink hair, carrying green and red striped crutches and a leg cast from his hip to his toes. We got chatting and everything around us faded. Sounds cheesy I know, but it must be true because we missed the concert – and I was a big fan.

I was 21 and in the last few months of college, he was 24 and working as a sound and lighting tech. He was on leave with a leg injury, which was due to a collapsing platform, so we hung out a lot and got to be close friends.

Two months after we first met, he lost a close friend to suicide. It tormented Austin that the last words he jokingly had said to him was “Fuck off”. I told Austin that his friend would have known that it was meant as a joke, I told him that his friend was now at peace and free from whatever pain he had been suffering, I told him he knew that Austin loved him. I told him that people don’t die because of a friendly joke. His friend had suffered from an illness. And that illness took his life. That is what I felt in my bones was the truth. So that is what I told him.

College wrapped up, so I moved back home and got a job in the town where Austin lived. He would come meet me for lunch and it was dreamy. We went for walks, giggling and holding hands like teenagers.

One weekend his parents were out of town, so I went over to watch a movie at his place. He had lit the fire. I smiled at that. But that’s the way he was. He wanted to make it cosy, so he saw nothing better than to light a fire in the middle of the summer.

We curled up on the sofa and he poured his heart out to me. He told me that he loved me, that he knew I was going to have a wonderful life. He told me stories about his best friends, even the ones I had never met. He gave me two CDs – Tori Amos’ ‘Scarlet’s Walk’ and Jeff Buckley’s ‘Mystery White Boy’ – and the dvd of ‘When Harry Met Sally’. He said he wanted me to keep them.

We watched ‘The Doors’ movie because Austin could not believe that I had never seen it. He knew the opening text of the movie by heart:

“The program for this evening is not new, you’ve seen this entertainment through and through. You’ve seen your birth, your life and death. You might recall all the rest. Did you have a good world when you died? Enough to base a movie on?”

I can’t explain this; I’m not usually a morbid person. But something gave me the chills that moment. Austin and I stayed up all night talking. The next morning I offered to pay him back €20 I had borrowed from him, but he wouldn’t take it. So I hid it beside his bed when he wasn’t looking. We kissed at the door and I walked down the driveway realising that my mother was going to kill me for staying out all night. Half way down the driveway I spoke without thinking. My mouth said “Goodbye” out loud. Shocked I stopped and looked around. Austin had already gone back inside and I knew he couldn’t hear me. Strange, I thought, where did that come from?

The next day on my way to work I drove past Austin’s house. I got the sudden urge to stop and ring the doorbell just to say good morning. Instead I sent Austin a text message to ask if he was going to meet me for lunch.

While chatting with my boss’s wife over a cup of tea later that day she got a short phone call and then said the words that would change my life forever.

“That Daly kid from Liffey Lawns just killed himself. He was 24.”

I said “My boyfriend is Austin Daly. He lives in Liffey Lawns. And he’s 24.”

The next thing I remember is standing outside Austin’s house, calling his phone and ringing the doorbell again and again and again, ready to give out to him for whatever confusion had caused this misunderstanding. I fully believed that he was still in bed asleep. My boss called the police and handed the phone to me. They told me that Austin was dead and that his parents were on their way home.

In the days after, I realised that Austin had prepared me as best he could for the hellish situation I was now in. His open coffin replaced the sofa in his parents’ living room where we had cuddled, and in that room I met everyone he had talked about. When the priest asked me what music he should play at the funeral, I handed him the Jeff Buckley CD. Austin had burned several things from his room in the fireplace, undeveloped rolls of photo film, diaries, letters, things I guess he didn’t want anyone to have to deal with after he was gone. So, his fire wasn’t just a spur of the moment romantic idea. He had plans for those flames after I left.

The days and weeks after that are a blur. People often said to me that I shouldn’t blame myself. This confused me hugely because the feeling of guilt had never even crossed my mind. However, now that someone had planted the idea, I started to wonder about the things I had said when his friend died a few months earlier. Did I tell Austin that it was OK to die? Did I tell him that we would all understand and know that he loved us? Did I tell him that dying would take away his pain?

And what about that morning? The postman found him, in his mother’s car filled with fumes. The doctor said that his body was still warm, which puts the time of death at around the same time I passed on my way to work. Was he sitting in the car when we drove past? Was he still alive? Could I have saved him if I had followed my instincts to ring the doorbell?

I decided that there was no way I could have known. And without knowing, nothing I could have said or done would have made a difference. If he had only talked to me about how he was feeling, then I could have gotten him help. But he hid his pain from me so that I could never say “I knew and I didn’t help”. Austin didn’t want me to blame myself.

I threw myself into finding answers, into trying to understand, I attended talks about suicide prevention, joined groups for people who had lost someone to suicide, went to counseling. What I learned in that time, and what I still believe to be true to this day is the following:

– Depression is a disease, just like cancer. If left untreated, it can kill you.

– Suicide is contagious. Once it touches your life it becomes a realistic option, it becomes something that can happen.

– People who say that suicide is selfish are wrong. Austin did everything he could to soften the blow that was coming for us. He did not want or choose to die, he died because he couldn’t carry the pain of his illness anymore.

– The way to fight the staggering numbers of suicide deaths is to talk. If we would recognise depression as an illness that can happen to anyone, if we would be aware of the warning signs and know how to look after our own mental health, if we would take care and comfort each other, then we would stand a chance to fight this.

Can you imagine how ridiculous it would be if you had a cold and were afraid friends would find out? Or if you had an open wound and decided not to go to the doctor for stitches?

The same way we check our breast for lumps, we should check ourselves and others for signs of depression, things like loss of interest in hobbies, increased or decreased appetite for food/sex/sleep/anything. Caring for our mental health is just as critical as taking care of our physical health. Knowing what depression is is a very powerful step towards fighting it.

The music venue where we first met burned down shortly afterwards.

I never went back to my job.

I still wish Austin had known that talking could have saved his life.

The story of how my heart broke (Seriously Hilary)