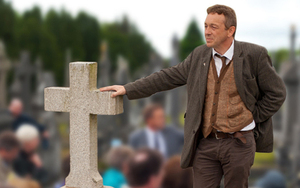 Shane, 46, was the driving force behind the redevelopment of Glasnevin Cemetery and loved sharing knowledge.  His death was likened to “a library burning down”.

[Shane] was seen on CCTV entering the cemetery via a staff entrance…Garda Tara Dolan said he was seen walking towards the main part of the cemetery. “He then turns around, salutes to the camera and walks away,” she told the coroner.

Gda Dolan said a number of letters to family and friends were found on Mr MacThomais’s person in the morgue. Coroner Dr Brian Farrell described these as “farewell” notes.