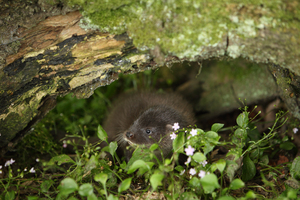 Shannon the otter (above).

Found orphaned and fragile at 2 months in the wilds of Donegal.

When a local family found Shannon, an orphaned otter of no more than 2 months, near the River Leannan in Co. Donegal and they contacted a local wildlife rehabilitator and he contacted the Irish Wildlife Rehabilitation Trust and the local NWPS Conservation Ranger. This started a 14 month process to rear and reintroduce a healthy and happy animal back into her natural habitat.

As is often the case with wildlife, it was in Shannon’s best interest to be reared with other otters giving her the best chance of successful rehabilitation and reintegration into the wild. Unfortunately none of the rehabilitators in Ireland (listed on Irishwildlifematters.ie) were rearing otter cubs so the IWRT had to contact the International Otter Survival Fund.

The International Otter Survival Fund (IOSF), located on the Isle of Skye in Scotland was found to have another otter cub of Shannon’s age and they could be reared together. A joint effort by the IWRT, USPCA, and the South of Scotland Wildlife Hospital then transported Shannon to the Isle of Skye.

Shannon happily spent the next year being successfully reared with another otter and now is totally wild and old enough to be released. Throughout the year IWRT and ISOF were in regular contact to ensure that Shannon was successfully rehabilitating.

During this time, IWRT was working with the local NPWS to ensure a ‘soft release’ for
Shannon in a safe, suitable location in Donegal. Making sure this location was away from roads or areas where otters could cause damage e.g. fishing lakes/fish farms.

The tremendous effort, dedication and co-ordination of people and organisations both in Ireland and Scotland has led to Shannon being successfully released back into the wild in Glenveagh National Park.

An eye from afar will be kept on Shannon to make sure she settles in well in her new home and socialises with other otters.

If you find an animal in the wild in distress contact irishwildlifematters.ie