A solargraph taken at the University of Hertfordshire’s Bayfordbury Observatory featuring 2,953 light trails of the sun’s movement captured over eight years and one month. The apparatus comprised a pinhole camera made from a beer can attached to one of the observatory’s telescopes by student Regina Valkenborgh in 2012, then forgotten. Valkenborgh sez of it:

It was a stroke of luck that the picture was left untouched, to be saved by David after all these years. I had tried this technique a couple of times at the Observatory before, but the photographs were often ruined by moisture and the photographic paper curled up. I hadn’t intended to capture an exposure for this length of time and to my surprise, it had survived. It could be one of, if not the, longest exposures in existence.

Fancy having a go yourself? 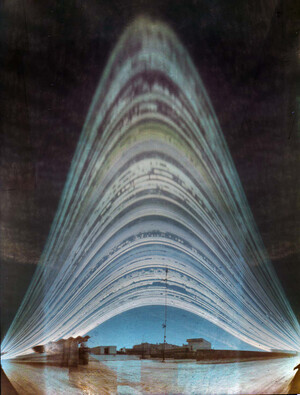 A composite image of the time between the Winter and (nearly) Summer Solstice (December 21, 2018 to June 16, 2019) all compressed into a single point of view. To wit:

Dubbed a solargraph, the unconventional picture was recorded with a tall, tube-shaped pinhole camera using a piece of photographic paper. Fixed to a single spot at Casarano, Italy for the entire exposure, the simple camera continuously records the Sun’s daily path as a glowing trail burned into the photosensitive paper. Breaks and gaps in the trails are caused by cloud cover. At the end of the exposure, the paper was scanned to create the digital image. Of course, starting in December the Sun trails peak lower in the sky, near the northern hemisphere’s winter solstice. The trails climb higheras the days grow longer and the June 21st summer solstice approaches.