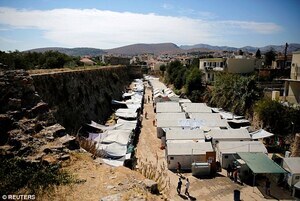 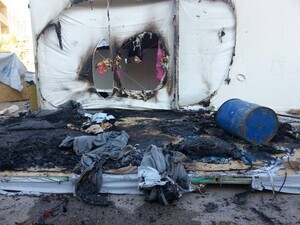 The refugee camp set up in the shadow of the Castle Of Chios, called Souda, on Chios Island, Greece and how parts of the camp looked after recent attacks on the camp

On Friday last, The Guardian reported:

Dozens of people have been driven out of a refugee camp on the Greek island of Chios after two successive nights of attacks by a far-right group.

At least two people were wounded after attackers threw Molotov cocktails and rocks as big as boulders from elevated areas surrounding the Souda camp, activists said.

Three tents were burned down and three others were hit by rocks. A 42-year-old Syrian man was assaulted, while a Nigerian boy was hit by a rock.

Fearing a third attack on Friday night, about 100 former occupants refused to re-enter the camp, instead taking shelter in a nearby car park. “We do not have any kind of protection,” Mostafa al-Khatib, a Syrian refugee, told the Guardian. “No one cares about us.”

The mayor of Chios said the attackers were thought to be affiliated with Greece’s main far-right party, Golden Dawn. “Of course Golden Dawn supporters are suspected to have participated,” Manolis Vournous told the Guardian.

Activists and camp occupants said the rocks appeared to have been thrown with the intention of killing people. Tan said: “These rocks were probably the size of a shoebox, weighing approximately 15kg. Some of them I can’t even lift.”

There were conflicting reports about who started the clashes on Wednesday. According to Vournous, the unrest began after Algerians and Moroccans stole alcohol and fireworks from a shop, frightening local residents. But some activists claimed the events escalated after a planned assault by Golden Dawn.

The attacks followed a two-day visit this week to Chios and Lesbos, the adjoining Aegean island, by a team of MPs from the neo-fascist Golden Dawn and far-right parliamentarians from Belgium.

John Underwood, whose sister is volunteering on Chios with Be Aware And Share tweeted yesterday:

My sister, currently helping run a refugee school in Greece, has asked me to pass this on. The Nazis are literally back. 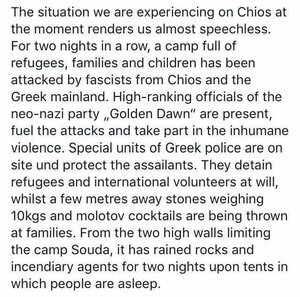 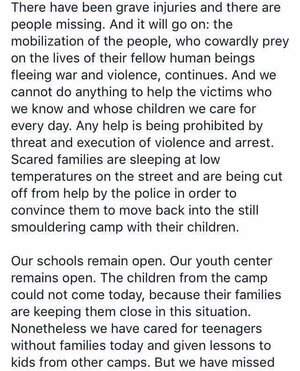 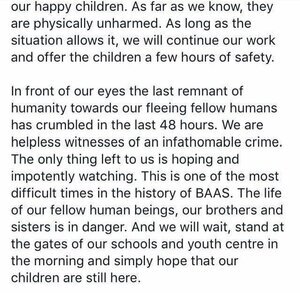 Readers may wish to note an academic paper published in 2013, called The Crisis before “The Crisis”: Violence and Urban Neoliberalization in Athens by Dr Dimitris Dalakoglou, of the University of Sussex.

In it, Dr Dalakoglou wrote:

Historically, since the 1920s the so-called para-state far-Right in Greece has functioned as the long arm of the state violent apparatuses, targeting people with left-wing affiliations during most of the twentieth century. The rise of the extreme Right after the outbreak of the 2010 crisis is a continuation of that tradition. Besides the Left or the anarchists, the current victims of extreme Right violence are mainly migrants.

A typical example of this escalation was in mid-May 2011, a few days before the start of the Syntagma Square movement, when a man in his forties was killed and robbed in the center of Athens, allegedly by migrants. Local extreme right-wing groups seized upon this incident to organize one of the country’s first large-scale anti-migrant attacks, with the tacit or explicit support of the police.

Anti-fascists and radicals were also targeted. Due to these organised fascist attacks, certain parts of the center became a no-go zone for migrants, especially people of colour.

The most prominent xenophobic group, the neo-Nazi Golden Dawn, was allegedly involved in many of these actions. Their unapologetic racism appears to be gaining in appeal. Golden Dawn received 7 percent of the votes in the national elections of May and June 2012; about half of the police officers serving in Athens voted for Golden Dawn, marking, if nothing else, the ideological links between state and para-state violent apparatuses.

The Crisis Before The Crisis (Dimitris Dalakoglou, Academia.edu)