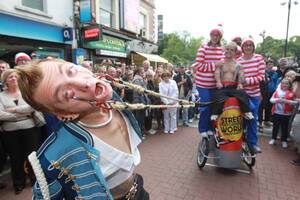 Launching the Street Performance World Championship this afternoon, the Space Cowboy broke the world record for the most weight dragged by the eye-sockets, pulling Goliath (the world’s smallest strongman) and five Wallys in a tricycle 10 metres up Grafton Street.

With his eye sockets.