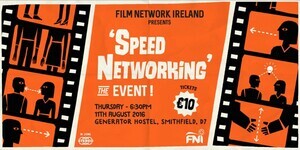 …No wait, come back!

Film Network Ireland is taking its online networking community into the real world with its first official meetup event. The event is open to any filmmaker looking to make some connections in Ireland and night will come in two parts:

First, is the speed networking event. From 7pm to 8pm, participants will have five minutes to talk to another filmmaker, introduce themselves, exchange information and talk about ideas.

After five minutes, a bell rings and each participant moves on to another person. This happens every five minutes for an hour.

The second part of the evening is the more informal part. Did you meet someone during the speed networking section who you wanted to chat with for longer? This is your chance to do so, as we open the evening to a more organic form of networking.

Yeah yeah, give us the short version.

Tickets are €10 and available here.