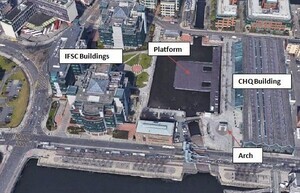 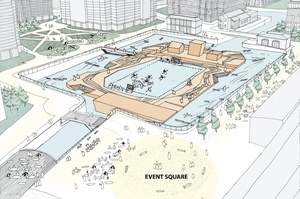 Proposals for a whitewater centre in St George’s Dock, Dublin 2. include a “swift water rescue training facility for the Fire Brigade and a kayaking and water polo pool…The white water rafting course will be located around the edge of the Dock with the swift water training facility and pool located in the centre”.

Recently, a proposal for a whitewater centre was put in front of Dublin City Council.

Dublin’s Lord Mayor, the cyclist-loving Nial Ring, described it a “white elephant” while Councillor Ciaran Cuffe said he would like to see the area refurbished as an outdoor swimming pool – we all know how well that went in Clontarf where the newly redeveloped pools are not open to the general public.

I believe that the councillors in question are not aware of all the facts that could make this facility great for Dublin.

Cardiff City in Wales with a population of 300,000 successfully runs such a facility.

Our elite whitewater athletes are being forced to train aboard, we’ve had great success in the Olympics in the past, but without this facility we are not competing on a level playing field.

There are over 3,000 registered kayakers in the Republic of Ireland who would use this facility rather getting the ferry to the UK or travel further abroad. –

A prominent location will help advertise a sport which is not soccer, GAA or rugby –

There are many groups in Ireland who do great work introducing children from disadvantaged area to adventure sports, having this facility in Dublin city centre would be a great boost to this work

Dublin Fire brigade and others involved in water rescue would benefit from being able to train at a facility like this.

The council said it will fund from its own resources combined with grants, and tickets sales are to fund the ongoing maintenance and upkeep.

The center will generate revenue from tourists – being in the city center it is easily accessible.

I have started a petition (below) which I plan to present to Dublin’s North Inner City councillors to show the support for this facility.

The petition has been open for only 24 hours and already has close to 1,000 signatures. I am hoping that Broadsheet readers who would support the building of this facility would sign.