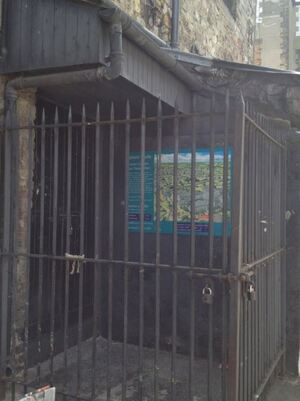 Described by Heritage Ireland as one of Dublin’s best kept secrets.

“The remains of St Mary’s Abbey near Capel Street, Dublin once the wealthiest Cistercian Abbey in Ireland. Now only two rooms remain in a dingy alleyway. And access to those is closed off. Cutbacks, I assume.”

St Mary’s Abbey is best known as the place where ‘Silken’ Thomas Fitzgerald, Earl of Fitzgerald. threw down his sword and started his unsuccessful rebellion of 1534. He was known as ‘Silken’ Thomas because his 140 horsemen had silk fringes on their helmets. Or something.
During his rebellion, he took over Dublin with the consent of its inhabitants, besieged Dublin Castle and executed the Archbishop of Dublin (for which he was excommunicated). He ended up being hanged and beheaded at Tyburn Hill, London.