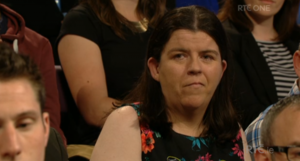 Corinna had worked in Dunnes Stores for seven months before she was recently sacked after taking industrial action. She said she had been working approximately 28 to 33 hours a week while, at Christmas, she worked 15 to 20 hours – because there are more workers hired during the Christmas period.

“After I took [industrial] action, on Friday, the 3rd of April, I was doing my shift and I was brought up to the office by personnel and the management. Basically, they just said they wanted to let me go. I asked, ‘why?’. And they said they couldn’t give a reason…I was very upset. I was told I had to work a week’s notice, which I did.

I just didn’t know what to do that day as I had to go back on to the check-outs, after I was being told, by management, that I was being let go…

No [I don’t regret the action I took]. I’m happy that I did go out on strike on that day because low-hour contracts – you’ve no life, you can’t plan your life. You can’t get mortgages, you can’t get loans. So, something has to be changed…I have to go on Social Welfare now and I have to apply for more work.”

Tony Malone, who worked in Dunnes Stores in Dundalk before he was sacked, told Claire:

“We went on strike on the Thursday and I went in on the Friday morning, as normal, and as the morning went along, I just spoke to one of my colleagues and said I had a weird feeling. And he said, ‘what do you mean?’. I said, ‘I’ve just an empty feeling’, I just feel something bad is going to happen.

So I went on my lunch, around 11am and I came back and I got the phone call to come up the stairs to the HR office and my manager was there and the HR manager was there and they asked me would I like any representation. I declined. So they sat me down and they says, ‘right, we’re going to have to let you go, due to the downturn in business.’ I goes, ‘sure this is victimisation over what happened yesterday’ and they said, ‘no it’s not’ and I goes, ‘well you look from the outside in and you tell me this isn’t victimisation, less than 24 hours after what happened yesterday’.

And I just left then…[Life on a low-hour contract] is bad. You can’t get bank loans for a house. You can’t get Credit Union loans. People don’t want to know you. All people are interested in is, what’s on your contract at the end of the week.

They don’t care if you’re getting 40 hours a week, all they’re interested in seeing is what you’re guaranteed every week…Everybody needs a bit of stability in their life. That’s all everyone was looking for, before anything happened. A bit of stability, a bit of a guarantee, so they can have a life.”

Dunnes Stores declined to have a respresentative on the panel.