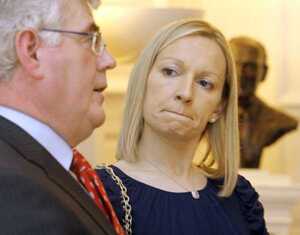 Ireland Stand Up – the name seeming to conjure up that version of Irish nationalism of yore where Catholicism was an assertion of ‘Irishness’ – cannot be too well staffed. It has a pitiful number of Facebook followers and has been up and running for little more than two months. Yet, they managed to draw 55 TDs and 20 Senators, including no less than Minister for Europe Lucinda Creighton (above with Eamon Gilmore), to a meeting in Buswell’s hotel near Leinster House last week. Creighton offered her support to the group’s agenda, namely that the Irish government ought to (eventually) reverse its callous decision to nix the Irish embassy to the Holy See!

When you hear of valuable advocacy networks for prison reform; or immigrants say, failing to attract even a tenth of these numbers (let alone endorsements) at meetings in Leinster House then something is seriously awry.

Standing up for the Holy See (James Cussen, Politico)