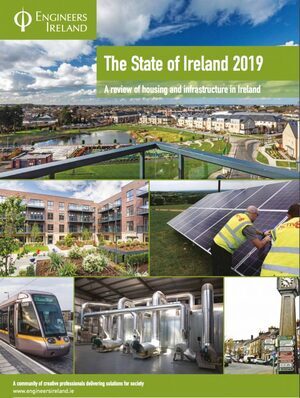 Engineers Ireland published a report entitled ‘State of Ireland 2019 – A Review of Infrastructure in Ireland’ in which it found:

Building Energy Ratings (BER) are an indicator of the energy consumption of buildings. The majority of dwellings in each of the bands from 1961 until 2008 achieved a BER of D or C mid-range. There has been significant and measurable improvement in building quality for new homes with the introduction of new Building Regulations in 2005, 2008, 2011 etc.

According to the SEAI (2018), Ireland’s carbon emissions per household are 58% higher than the rest of Europe.

The average floor area of Irish homes increased by 15% between 2002 and 2016, which partially negated these gained energy efficiency benefits.

According to Eurostat (2017), 12.6% of the Irish population (approx. 600,000 people) lives in a dwelling with a leaking roof, damp walls, floors or foundation or rot in window frames or floors.

The 68-page report can be read in full here