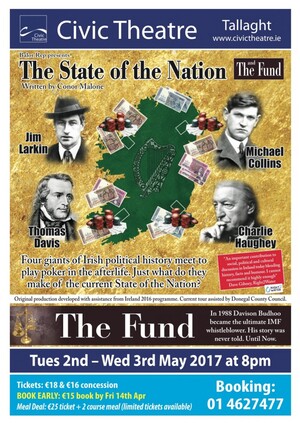 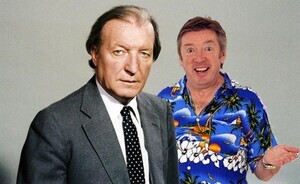 From top: Charlie Haughey and Conal Gallen, who play him in The State Of The Nation

Was it for this that Michael Collins died? Would Big Jim Larkin be turning in his grave? And what would idealist Thomas Davis and arch pragmatist Charlie Haughey make of the current slew of political scandals?

Find out in The State Of The Nation – a new comedy coming to The Civic Theatre, Tallaght, The Balor Arts Centre, Ballybofey and The Playhouse Derry in May.

Four towering figures from Irish political history meet to play poker in the afterlife. As the game draws on the conversation hots up – covering topics from 1916 to civil war politics, water charges to hospital waiting lists and Apple tax to Brexit..

The State Of The Nation, features Conal Gallen as Haughey and Cillain O Gairmhi as Collins forms part of a theatrical double bill with the evening also featuring a staged reading of award winning radio play The Fund – a re-imagining of the shocking true story of IMF whistle-blower Davison Budhoo.

The Civic will also be hosting a post show discussion after the show with guests including Frankie Gaffney, Conor McCabe and Terry McMahon.

May 2 and 3: The Civic Theatre, Tallaght
May 5 and 6:  The Balor Arts Centre, Ballybofey
May 7:  The Playhouse, Derry

The State Of The Nation