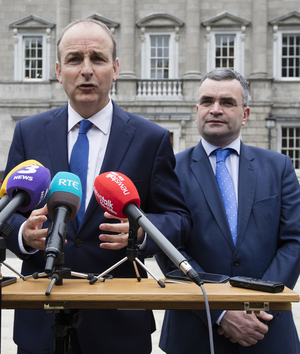 “This morning Deputy Dara Calleary tendered his resignation as Minister for Agriculture, Food and the Marine, following his attendance at the Oireachtas golf dinner on Wednesday evening.

“His attendance at this event was wrong and an error of judgement on his part. I have accepted his resignation. People all over the country have made very difficult, personal sacrifices in their family lives and in their businesses to comply with Covid regulations.

“This event should not have gone ahead in the manner it did given the Government decision of last Tuesday.

“Dara Calleary, since he was first elected to Dail Eireann has been, and remains, a committed and dedicated public representative. This error of judgement was out of character. He has made the right decision for the country, particularly in the [sic] light of our continued effort to suppress Covid-19.” 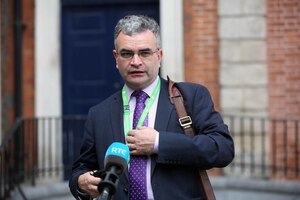 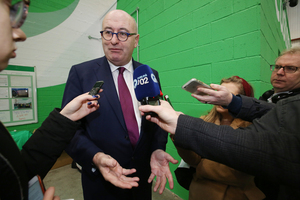 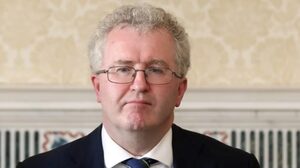 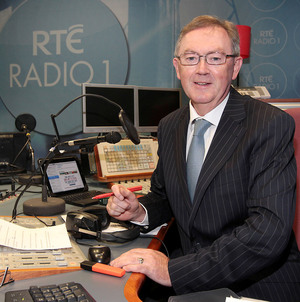 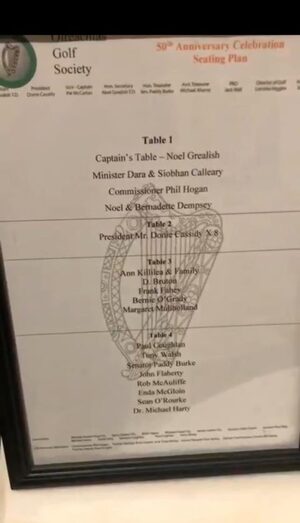 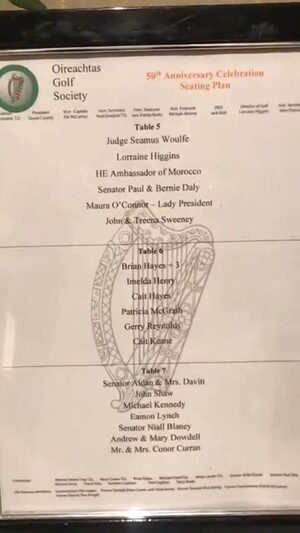 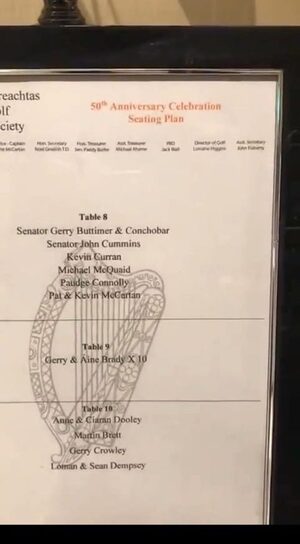 From top: Fianna Fáil Minister for Agriculture Dara Calleary, EU Commissioner and former Fine Gael minister Phil Hogan, Supreme Court judge Seamus Woulfe; former RTE presenter Seán O’Rourke; some of the alleged seating plans for the 50th anniversary OIreachtas Golf Society event at the Station House Hotel in Clifden, Co Galway on Wednesday night. It has not yet been confirmed whether all the people listed attended

Within hours the story was picked up by BBC and the New York Times.

This morning, Mr Calleary was scheduled to appear on RTE’s Morning Ireland but it later emerged that his spokesperson told RTE that he was no longer available. It’s since emerged that Mr Calleary is now resigning from Cabinet (see tweet above).

Minister Calleary, Senator Buttimer and Senator Cummins have all since apologised, while a spokesperson for Brussells-based Mr Hogan told the Irish Independent that Mr Hogan “complied fully with all quarantine/restricted movement requirements on his return to Ireland”.

A spokesman for the hotel told The Irish Examiner that the 81 people who attended the event were divided by an partition, into two sets of 45 and 36, while the event’s table plan listed 10 people per table.

However, around 24 hours before the anniversary event on Wednesday, and after a three-and-a-half Cabinet meeting, Taoiseach Micheál Martin announced a new suite of Covid-19 restrictions including:

– A maximum of 6 people are seated at a table at restaurants and cafes (including pubs that serve food and hotel restaurants); and that no formal or informal events or parties should be organised in these premises.

– People should continue to work from home where possible.

– All visits to homes should be limited to six people from outside the home, from no more than three households (indoors and outdoors).

– All outdoor gatherings should be limited to 15 people, down from 200.

– Indoor events should be reduced from 50 people to just six people, except for businesses such as shops and restaurants.

– Indoor weddings and some religious services, such as mass, are exempt and can still take place with up to 50 people.

– All sporting events and matches should take place behind closed doors with strict avoidance of social gatherings before and after matches. Training sessions should follow the rule of six people indoors and 15 outdoors.

– Gyms should have no more than six people in an exercise class.

– Public transport should be avoided.

He also said that the Attorney General, Minister for Health and Minister for Justice were considering introducing legislation to give additional powers to “gardai and agencies to enforce public health measures”.

In addition, when the Taoiseach was asked when these restrictions would take effect, Mr Martin said they were taking effect immediately.

“The ‘tightened’ restrictions announced earlier this week don’t yet have any force of law. The Department of Health says no regulations have been signed (yet) to lower the number of people who can attend gatherings.

“But…that means the existing Phase 3 regulations still have the force of law. Those regulations prohibit any “event for cultural, entertainment, recreational, sporting, social, community or educational reasons” which intends to accommodate 50 people indoors, unless it’s in a home.

“But more than that: it specifically makes it a penal offence to organise such an event. A person who organises such an event for over 50 people could face a fine of €2,500 and even, prospectively, six months in prison. Note: This applies only to the organisers, not attendees.

“So: organising an indoor event for 50 people is legally a Big Deal. (Especially so, perhaps, when the organiser is the Oireachtas Golf Society.) But: here’s the rub. The organisers, and hotel, believe they were in compliance with the rules – because they split the party in two.

“The two parallel rooms were placed in a hotel function room with a partition (the standard hotel ballroom variety), which was not drawn fully across. Attendees have told me the partition was left partly open so that hotel staff could go between rooms to serve food, and so on.

“The hotel’s stance is that it wasn’t one function, it was two – with 45 in one room and 36 in the next. But I also understand that, not only was there a single table plan presented to accommodate the 81 attendees, speeches were given in one room, addressed to those in the other.

“So was it one event or two? That’s probably subjective – but if you think it was all one event (which the organisers and venue clearly don’t) it would seem an evident breach of the law which carries not only a possible fine, but also a threat of jail, for its organisers.”

Meanwhile, this morning, on RTÉ’s Morning Ireland, Ms Moore told Rachael English – who asked if the news wasn’t being well received given so many people had made sacrifices such as missing funerals, weddings, christenings in order to adhere with the Covid-19 restrictions:

“Me and Paul Hosford who wrote the story with me, both of us actually put our weddings off. We were both supposed to get married so yeah we’ve also made those sacrifices. But I think, yeah, when the story went up last night, and it started to gain traction, we started to get emails into  the Irish Examiner, from nurses, from teachers, people who were living in Kildare, people who lived in Laois and Offaly who were just voicing their serious frustrations is the only word for it, you know, and anger.

“And I think the big thing, and for years to come, I think what people will remember most about this time period, for Irish people, is definitely funerals. Funerals are so important here, the whole protocol around death is so important to people.

“And I do think that that’s the thing that’s really going to stay with people. We’ve all seen those like heartbreaking images of people saying goodbye through the windows of nursing homes and stuff like that. So I think…that’s the main thing that people are so upset about. That we’ve all made these sacrifices and, you know, this silly mistake from people who are supposed to know better kind of flies in the face of that.”

‘I should not have attended the event’: Minister apologises for attendance at golf event in breach of health guidelines (Aoife Grace-Moore and Paul Hosford, Irish Examiner)