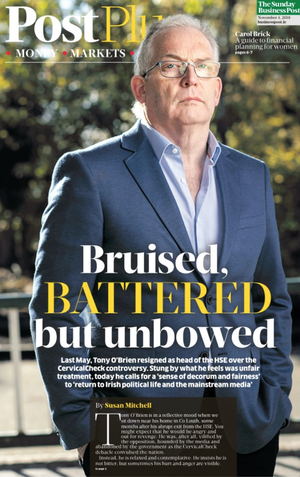 The Sunday Business Post published a lengthy interview with former chief of the HSE Tony O’Brien, his first interview since he left the organisation in May, following the cervical check scandal.

In the interview, Mr O’Brien said the Minister for Health Simon Harris acted like a “frightened little boy” during the CervicalCheck controversy and said he’s a weak minister obsessed with media coverage and “runs scared of headlines”.

He said the Public Accounts Committee acted like “a kangaroo court”, and he specifically accused Sinn Féin of being “destructive”.

He said Sinn Féin had “effectively swapped the balaclava for parliamentary privilege”, adding that “the bile and vitriol with which they attack public servants continuously is staggering”.

He also said he hoped a “sense of decorum and fairness would return to Irish political life and to the mainstream Irish media”.

Limerick mum-of-two Vicky Phelan has tweeted her thoughts on the interview.

In April Ms Phelan sued a US laboratory for misreading her cervical smear test and received a settlement of €2.5million in the High Court.

After Ms Phelan went public on the matter, it emerged that 221 women with cervical cancer, whose previous smear tests were reviewed after they received a diagnosis of cancer, were not told that their smear tests had actually been recategorised on review and that they could have been advised to have an earlier follow-up or warned of an increased risk of developing cancer.

Meanwhile, Cork dad-of-two Stephen Teap, whose late wife Irene was one of the 221 women, also responded to the article…

Head of the "Old Boys Club" gets taken out, read his bitter response here in this interview. "HSE’s initial response to the crisis had been a trainwreck", who was the leader of this "trainwreck"? Where are the questions on his poor leadership skills @susmitchellSBP #Cervicalcheck https://t.co/HMfZUetqPC

"In the HSE they are used to getting trounced but they are not used to it in the Dept of Health" in today's @thesundayindo ,here lies the problem,when the Nation sides with the victims, those protected by system of zero accountability become "furious" #cervicaclcheckdebacle

Reminds me of the content of what was actually leaked in the Scally Enquiry, Scallys personal opinion of there being no need for Commission of Investigation, in other words the Civil Servants won't be investigated! Any Wonder that is what they choose to leak!! @thesundayindo

And Lorraine Walsh, from Galway, who is also one of the 221 women and who cannot have children as a result of her cervical cancer, also responded…

Pity after all this time he couldn’t take responsibility for the disaster that is the HSE, that he lead and desperately failed at leading! Shame on you Tony O’Brien, you made me sick and now 6 years later you make me feel sick! https://t.co/pmdHKHwcTw 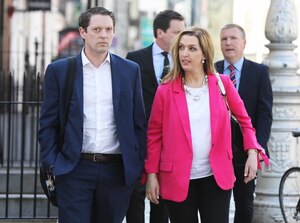 Heartbroken this morning at the disrespect shown towards the women and families in this scandal by Government @SimonHarrisTD @campaignforleo leaking this report before the families find out, very upsetting waking up to this #cervicalcheckscandal

President of the Epidemiology and Public Health section of the Royal Society of Medicine Dr Gabriel Scally; Stephen Teap, whose wife Irene died of cervical cancer;  and Vicky Phelan, who has terminal cancer; a tweet from Mr Teap

Minister for Health Simon Harris will seek to bring forward a briefing for those affected by the CervicalCheck controversy by 24 hours after they expressed anger at leak of parts of a report into the affair.

Mr Harris said it was “extremely regrettable” that parts of 200-page scoping report by Dr Gabriel Scally, the public health veteran, were published in The Irish Times and RTÉ ahead of the publication of his report tomorrow.

He said the report should be published and the views of “a very eminent expert” asked to investigate the controversy should be considered.

“All along I wanted them to be briefed first.”

…The Scally report, a 200-page document that investigates why women diagnosed with cervical cancer were not told about an audit revealing false negative smear tests, concluded a commission of investigation was not needed.

CervicalCheck: briefings on Scally report may be brought forward (The Irish Times)

Thread by @PhelanVicky: ” I am late to the table with my reaction for 2 reasons. Lest you all forget, I am still an ill woman battling cancer. The FIRS […]” #CervicalCheck 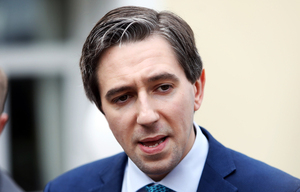 The Minister for Health Simon Harris was interviewed on RTE’s Morning Ireland by Dr Gavin Jennings.

Mr Harris told Dr Jennings he “truthfully” doesn’t know who leaked the report and that he intends to find out who leaked it.

Simon Harris: “Well that is the factual position. The Government made that decision and as I heard [Labour TD] Alan Kelly correctly say the Opposition agreed with that decision and indeed those impacted called for that. So that remains the position. Obviously, when you ask an expert to do a report and remember this wasn’t just one very eminent doctor. It was Dr Scally with three other doctors, a senior counsel, a barrister at law – they’ve reviewed over 12,000 documents, they’ve visited the labs, the labs that have been much talked about and speculated upon, they’ve stood on the floors of those labs. They’ve interviewed all the key people.

“Obviously, he has arrived at  viewpoint, it’s not, as you correctly said earlier, it’s not a recommendation. It’s his personal view. So what I intend to do is let the report be published. Let Dr Scally speak to the report, meet with the Opposition, meet with some of those affected and impacted by this terrible debacle and then decide whether people feel there’s a need for one.

“But, absolutely, if there’s a feeling that there’s a need for one, that will be the case.

“The only people that can change that decision are the Government and the Oireachtas. But obviously, if a very eminent expert has been asked to look at this area and has made a view, I think it’s important that we at least let the report be published and consider why he arrived at that point.”

Jennings: “Just to quote you again. This is from June the 15th: ‘I believe that a Commission of Investigation is needed to get to the bottom of many of the issues – particularly issues in relation to accountability. Who knew what, where and when. That’s not Dr Scally’s job and Dr Scally is very clear on that’.”

Harris:  “Yeah and that’s exactly correct, I mean it wasn’t Dr Scally’s…as I heard Lorraine [Walsh] say very correctly, Dr Scally didn’t have powers of compellability. Having said that, Dr Scally has interviewed everybody that he wished to interview, is my understanding. But let’s, let’s just wait the 24 hours. Let’s see why Dr Scally arrived at that viewpoint. Let’s discuss it and debate it in the Oireachtas, and most importantly, with people impacted. We wouldn’t have a Scally Report tomorrow if it wasn’t for Vicky Phelan and her bravery. So I’ll also take very seriously, their views in relation to this.”

Jennings: “I may be misinterpreting you. When you said you were very clear there will be a  Commission of Inquiry and you were going to set up that inquiry in September, are you saying that’s less clear now. Are you going to wait to see what this report has to say?”

Harris: “Well it was my intention to set up a commission in September. That remains my intention. But we do need to see, I’ve heard, for example, I’ve heard Lorraine say this morning that she wants to see why Dr Scally arrived at that point. So I do think we should wait the 24 hours, let the report speak for itself, let Dr Scally speak to the report, and then lets decide as an Oireachtas and a Government what next steps to take in consultation with the women and their families who’ve been impacted…”