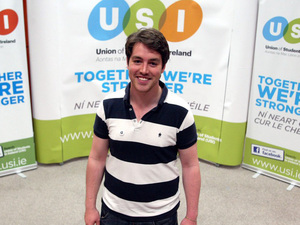 “Once [USI President John Logue, above] finished, just one question was taken from the floor before it was declared that we were all going to the Dáil viewing gallery to “scare the shit out of the TDs”. As the small crowd proceeded to jump up with excitement, a councillor asked if he could speak briefly, since he had also been asked to come to the meeting. He spoke while half the room ignored him.

“The low point was when I saw people, including our own Students’ Union’s education officer, using the hashtag #freelogue on Twitter, creating a comparison between being an idiot in the Dáil gallery and people who have actually engaged in serious protests and been persecuted politically in other countries. Another low was when I saw our Students’ Union’s president making ridiculous comments to TDs on Twitter, including the comment: “I think Intel, Google … etc are not concerned about reading and writing”.

Trinity’s Mark O’Meara delivers a scathing appraisal of the USI, following the arrest of its president John Logue at the Dáil a fortnight ago.