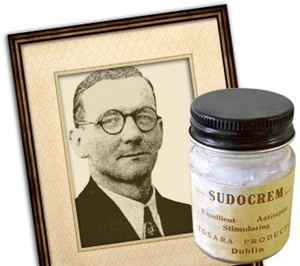 Sudocrem 1931 invented by Dublin pharmacist Thomas Smith. Sure where would we be without it? Every tub of Sudocrem sold worldwide is still made in Baldoyle. pic.twitter.com/gkFlYSGknd

He came up with the formula for the nappy rash cream at his pharmacy at 1 Old Cabra Road.

He called it Smith’s Baby Cream and had the following detail printed on the label – ‘Smith’s Special Skin Ointment for the treatment of ulcers, pimples and all skin eruptions‘.

His son, Brendan, came up with the idea of sending the cream out to new mothers. He would trawl the local papers for the births announcements and send out sample cream to all of the mothers on the lists.

Smith wasn’t just a whiz at direct marketing it seems, he was also unusually pro-active about dealing with customer feedback. If someone wrote to complain about Sudocrem, he would visit the family personally to find out what the problem was.Such dedication paid off in the ’60s and ’70s when lucrative new markets opened up for his creation.

The recipe for Sudocrem hasn’t changed much from the one Thomas Smith first whipped up in 1931. Nowadays it’s a team of gowned workers who mix together the main ingredients – zinc oxide, benzyl alcohol, benzyl benzoate, benzyl cinnamate, and lanolin with various waxes – to produce the thick soothing paste.

From something that started in the back room of a chemist’s shop on the Old Cabra Road, Sudocrem now ships to 44 territories all over the globe from the factory which is now situated in Baldoyle…