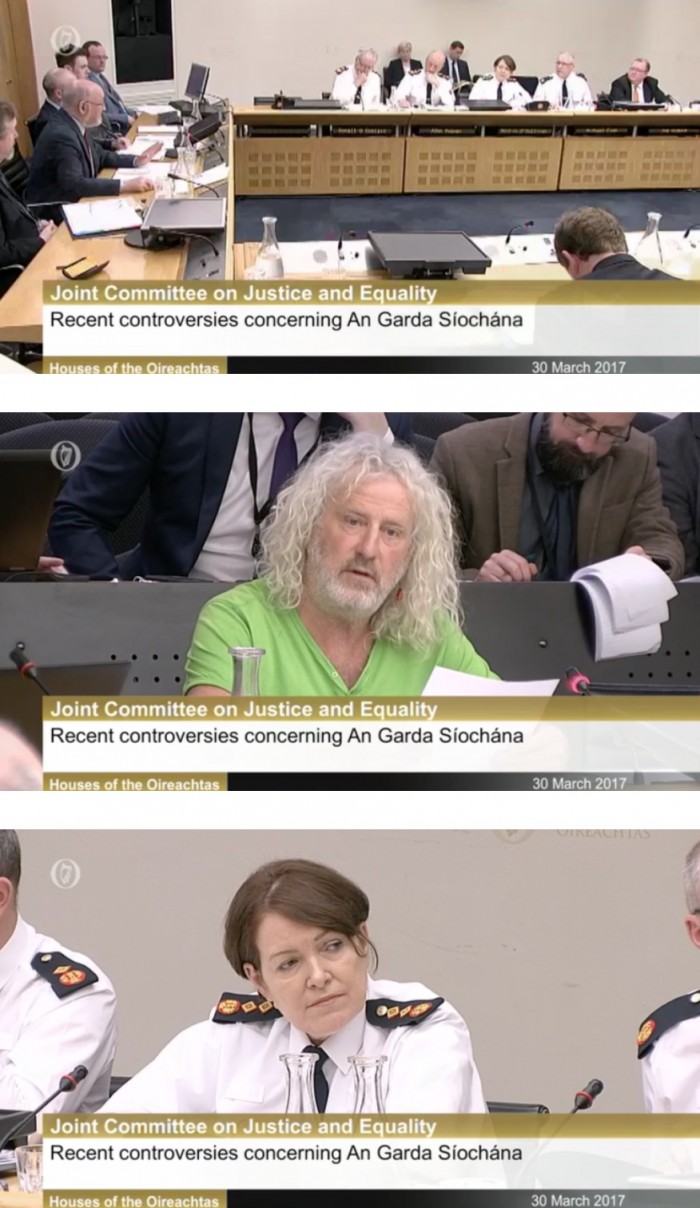 In light of the latest Garda controversies.

Readers may recall a post from yesterday in relation to Assistant Commissioner Michael Finn’s announcement last week that Superintendent Pat Murray from Athlone had been appointed  to carry out the “fact finding” internal investigation in relation to the near one million false breath test figures and 14,700 wrongful convictions.

The post drew attention to the fact that, previously in the Dáil on December 15, 2015, Independents 4 Change TDs Mick Wallace and Clare Daly spoke about Superintendent Pat Murray.

Mr Wallace said of Superintendent Murray: “This is an individual who has harassed and bullied a Garda whistleblower to an awful degree for a long time.”

He also said that he would give the Minister for Justice Frances Fitzgerald proof of  Superintendent Pat Murray reclassifying crime figures.

During this morning’s meeting of the justice committee, Mr Wallace asked about Superintendent Pat Murray and the Garda’s internal investigation.

Mick Wallace: “Senior garda indiscipline is not under the remit of the Policing Authority, right? But, Commissioner, it is within yours, right? And would you agree that there’s a problem around how Garda indiscipline is dealt with? Now, in line, in tune with the question, I wanted to ask if Superintendent Pat Murray had any involvement in the internal inquiry? You might answer that for me?”

Noirin O’Sullivan: “Deputy, or chair again, I’ll take your direction on this. I don’t think it’s appropriate to speak about individual members and, you know, I’m not sure what the question specifically relates to but I’m happy to answer a question on a broader issue if you wish.”

Wallace: “I just read a press report that Superintendent Pat Murray was actually involved in a, but I don’t know if it’s true or not. And I just wanted the commissioner to confirm if yes or no…”

Ó Caoláin: “Is their a relevance to you raising it….

Wallace: “There is yeah, it’s connected to…”

Ó Caoláin: “…To be careful again, in the context of what I cautioned members about, at the outset of the meeting, I’m not privy to what is in your question…”

Ó Caoláin: “Commissioner I, again, I’ve no advance indication of the questions such as this presenting. I appreciate that there are subliminal issues involved. You’re free to answer as you deem appropriate and, if the matter is inappropriate, in your opinion, I would accept that that is the case and we’ll move on.”

O’Sullivan: “Well, chair, thank you. Deputy, what I can tell the committee here today is that commissioner Michael O’Sullivan is appointed to conduct the investigation and to establish the facts.”

Wallace: “So you’re saying that Pat Murray is not involved?”

Ó Caoláin: ” That, I think, I think, with respect, the Commissioner does not believe that that is appropriate in the context that you’ve raised. And I’m respecting that, deputy Wallace. Is that, that is your position, Commissioner?”

Wallace: “So is he not involved in it?”

Ó Caoláin: “Can we move on please?”

Wallace: “Right, I’ll move on. I realise it’s hard to get answers.”