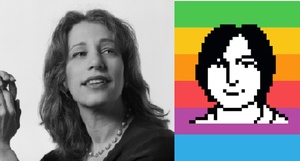 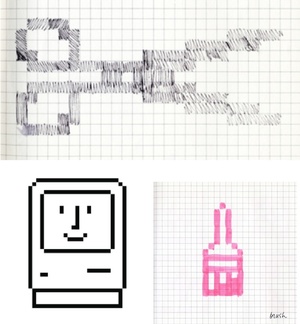 Artist and graphic designer Susan Kare: we owe her so much. An early member of the Apple team, she designed the original icons for the Macintosh. The images above are her original sketches of some of the screen candy we now take for granted, on the Mac and elsewhere.

Inspired by the collaborative intelligence of her fellow software designers, Kare stayed on at Apple to craft the navigational elements for Mac’s GUI. Because an application for designing icons on screen hadn’t been coded yet, she went to the University Art supply store in Palo Alto and picked up a $2.50 sketchbook so she could begin playing around with forms and ideas. In the pages of this sketchbook, which hardly anyone but Kare has seen before now*, she created the casual prototypes of a new, radically user-friendly face of computing – each square of graph paper representing a pixel on the screen.

The Sketchbook of Susan Kare, the Artist Who Gave Computing a Human Face (Steve, Silberman, Neurotribes)