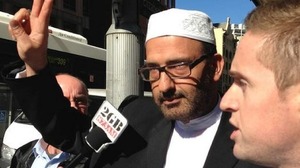 Even his flag was false.

The man who is holding more than a dozen people hostage and placed Sydney’s CBD into lockdown is no stranger to the NSW police or the judiciary.
Self-described cleric,[Iranian refugee] Man Haron Monis, 50, first came to attention of police when he penned poisonous letters to the family of dead Australian soldiers.