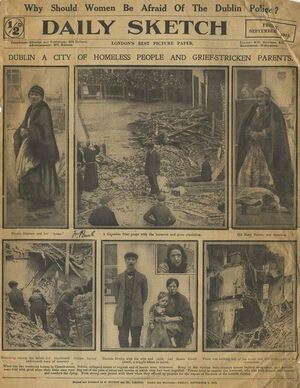 The front page of the Daily Sketch, which reported on the collapse of two tenement houses in Church Street, Dublin on September 2, 1913, during which it’s believed six people died, and at least seven were injured.

From the front page report:

“When the two tenement houses in Church Street, Dublin, collapsed scenes of anguish and of horror were witnessed. Many of the victims were crushed almost beyond recognition and others were wild with grief when their little ones were dug out of the pile of stones and mortar in which they had been engulfed. Priests tried to console the bereaved, who lost both friends and homes, and comfort the dying. Even strong men joined with them when they offered up prayers for the repose of the souls of the humble victims.”

“An inquest held into the collapse revealed that the Dangerous Buildings Inspector had examined the houses at the beginning of August, and ordered that immediate renovation work be carried out. In a follow-up visit on 15 August, the Inspector passed the buildings as safe, although he admitted to the Coroner’s Court that he could not see whether a new supporting beam had been fitted because it was blocked at the time. The Church Street disaster was not the first time tenements had collapsed, but the numbers killed and injured were unparalleled.”