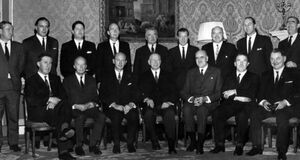 “I think for the first that time this was a legitimate covert operation of the state in an effort to raise, arm, supply both the IRA and ‘citizen’s defence committees’ as they were politely termed

…[it was ] an authorised political operation mounted by the then [Jack Lynch led] government, of which my father [Brian Lenihan Snr. – top pic third left standing) was a member and he never made any secret to us at home what that was about and everybody knew about it

Yet for 20, 30 years in Ireland it would almost put you off the country. We were in denial about this and a lot of people, because of the influence, I suspect, of Jack Lynch and those around him were able to suppress that and say ‘it was a rogue element within the government’ privately and off their own initiative arming the IRA or giving weapons to people north of the border’…”

Former Fianna Fail Minister Conor Lenihan discussing The Arms Trial during a talk on Charles Haughey at the Little Museum of Dublin. Mr Haughey was implicated in the scandal, sacked by Mr Lynch and, although acquitted in a subsequent trial, had his political career derailed for a decade. Mr Lenihan is the author of Charles Haughey; Prince Of Power.