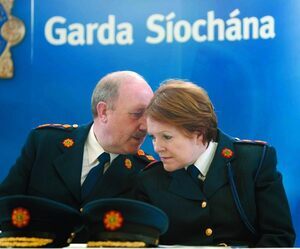 With the publication of the Charleton Tribunal’s findings the public can apparently sigh with collective relief.

Maurice McCabe and John Wilson — the latter having been forgotten about in most reporting — have both been vindicated.

Both men risked their careers and health in order to publicise Garda malfeasance and corruption.

Penalty points were wiped, cases improperly investigated, and suspects released on parole when they should never have been released in the first place.In the latter case the person in question went on to commit murder.

The two men, Justice Charleton found, were essentially working together in order to denigrate the characters of Mr. McCabe and Mr. Wilson.

Justice Charleton wrote that “Superintendent Taylor completely understated his own involvement” in the campaign against both whistleblowers.

Mr Callinan’s denial of reported statements he made to various people, in which he called Maurice McCabe a paedophile and rapist, were themselves disbelieved by Justice Charleton.

All in all, the reporting of Justice Charleton’s findings has been one in which the idea that the truth has been ferreted out by a thorough investigatory procedure is accepted at face value.

Therefore, we can all rest assured that the guilty either have been or will be punished.

But is that really the case?

Justice Charleton’s report reads as an inconsistent investigation whose limits were not only set legally, but also it seems ideologically. Scapegoats had to be found and they were.

Martin Callinan and David Taylor provide both. The evidence against both men was too large to ignore and simply too well known by politicians and journalists.

On the other hand, limits as to who could be blamed were clearly set.

John McGuinness TD gave evidence that after a meeting of the Public Accounts Committee (PAC), Martin Callinan had approached him in the chambers and told him that Maurice McCabe and John Wilson were “fucking headbangers”.

He also told TD McGuinness that McCabe “fiddles kids”. In his evidence TD McGuinness also pointed out that David Taylor and, Martin Callinan’s eventual successor as Commissioner, Nóirín O’Sullivan “were present when these remarks were made.”

David Taylor, in his evidence, confirms this. Callinan would the next day meet TD McGuinness in a car park for the now infamous meeting in which he reaffirmed his statement regarding McCabe and Wilson. In his report, Justice Charleton writes that “The conversations as described by John McGuinness TD took place.”

Yet, he also states that “There is nothing to show” that Nóirín O’Sullivan knew anything about former Commissioner Callinan’s comments.

This is despite the fact that two witnesses, one of whom the Tribunal considered to be completely honest in his evidence, placed her at least within earshot of the comments made after the PAC meeting.

It is also despite the fact that on other occasions Justice Charleton says that evidence given by former Commissioner O’Sullivan is, quite literally, unbelievable.

“The tribunal cannot accept her evidence”, writes Justice Charleton, regarding her claim that she did not take any phone calls from her counsel in the aftermath of their cross-examination of Maurice McCabe during the O’Higgins Commission; a cross examination during which Maurice McCabe was described by some as having had his character “traduced”.

Nonetheless, in the report it states that this “had nothing to do with Commissioner O’Sullivan.”

There is, of course, also the issue of missing phones. As stated in the report, “six phones used by Commissioner Nóirín O’Sullivan during the relevant period” were requested. Only one of those phones was received.

The lonesome phone that she did turn over was used “intermittently”, with her son coming to use it on “a basis personal to him”.

Martin Callinan also used six phones during the relevant period but like O’Sullivan, a number of them were missing.

The Tribunal received only two of the phones in question. As egregious as this may sound, however, David Taylor had previously told TD Clare Daly that phones and SIM cards were regularly destroyed in order to get rid of evidence but this is not linked in the report to the issue of the missing phones.

Instead, the fact that a number of phones belonging to both Martin Callinan and Nóirín O’Sullivan have gone missing is accepted as is and without much comment on the part of Justice Charleton.

All of this is just one aspect of a report which reads more like an exercise in bureaucracy than an investigation into malfeasance and corruption on the part of some of the most powerful people in the country.

Coincidences abound, questions remained unasked let alone unanswered, and the evidence of witnesses who are considered to be completely honest and reliable is accepted on a basis of when it suits the investigation.

ohn McGuinness is reliable when he gives evidence regarding what he was told by Martin Callinan. When he states that Nóirín O’Sullivan was there when the comments were made, however, this part of his evidence goes ignored.

The furthest that Justice Charleton goes in assigning culpability to Ms. O’Sullivan is when he writes that it was “improbable that she did not have an inkling at the very least about Commissioner Callinan’s views.”

Blame needed to be assigned to someone. Martin Callinan and David Taylor meet this description and have been duly sacrificed on the altar of political expediency.

Of course, I am not arguing that what both men did was not contemptible and slanderous.But there is more to the entire story than just two men who set out to denigrate the characters of Garda whistleblowers.

It appears that a hierarchy of plausible deniability was created in order to protect individuals the further up the chain it went. And the only reason Callinan and Taylor have been duly sacrificed is that they were too vociferous in their methods.

Subtlety is the bedfellow of intrigue. In this regard it was easy to point the finger at these two given their complete lack of subtlety.

Yes, Maurice McCabe and John Wilson have been vindicated but there are people who participated in their vilification who remain unscathed and in some cases unidentified.

In the Charleton Report, the concept of a constructed plausible deniability among the upper echelons of the political and social worlds has shown its purpose and value. In this sense then, for the rest of us at least, vindication has come at the expense of justice.