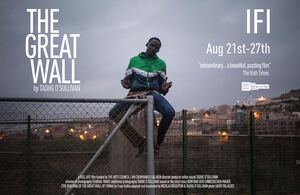 “This bold new documentary, an adaptation of a Kafka story, looks at the enclosure of Europe by a complex system of walls and fences. Mysterious and visually dazzling, the film journeys across a range of European landscapes, and encounters those whose lives are defined by these walls – detainees within European migrant camps.”

“The film was shot in 11 countries over a year, and journeys from a Spanish enclave in North Africa where the border with Europe is marked by a three-metre barbed fence, to London and Brussels, seats of power and exclusion.”

Also at the IFI on Sunday, at 1pm, Tadhg will present a selection of his new and older shorts.