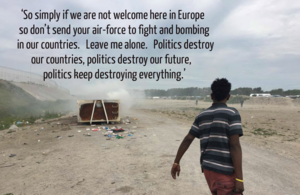 Human rights activist Bairbre Flood, from Cork, has created an hour-long radio documentary, The Hungry Road, in which she speaks to people seeking refuge who are subsisting in the makeshift camp in Calais, France.

The police have stopped volunteers bringing in building materials so with the influx of around 70 new people a day, many are living in cramped tents.

One medic from Ireland, Elena Lydon, who regularly works in the camp,said that ‘for the first time people were coming up saying they were hungry to us in the first aid caravans.’

Most of us know of all this, as Calais has been substantially reported on this last year, but what are people really like in the camp? Where have they come from – geographically, culturally, personally?

‘The Hungry Road’, a reference to the Irish famine, is an attempt to get behind the statistics and hear what some individuals have to say about living in what most described as ‘hell’.

Everyone I talked to had endured incredibly traumatic events in both their original countries and along the road seeking refuge in Europe.

Blocked at the final hurdle, many are now seeking asylum in France, but have to wait in the camp while their application is being processed.

Others are trying desparately to reach family members in Britain where they feel people are more sympathetic to refugees and not as racist as the French.

Many speak English already and say that there are better job and study opportunities there.

Still, others have heard that the asylum process is much quicker than in France and they will be able to apply for family reunification for loved ones who could get no further than Lebanon, Turkey and other countries.

Whatever their reasons, and there are many – they have the right to be treated with respect and allowed to choose the country which they feel will be best for them and their families. That’s what Irish people have been doing for generations.

There are about 50,000 undocumented Irish migrants working in the US illegally. Imagine if Irish people in the States were treated the way the people in Calais are treated?

Police regularly tear-gas the camp and almost everyone I interviewed had been beaten or pepper-sprayed by the CRS. One man told me how a police officer took one of his shoes when he caught him near the town. Another, of how he was pepper-sprayed in the face at the train station.

And the utter feeling of neglect is palpable in an EU that spends more on border fences, tear-gas, scanners, dogs and razor wire than it does on caring for peoples basic needs or allowing them safe passage.

How can we justify that? What is it like for people already suffering, to have to deal with this abuse and neglect?

Bairbre created the documentary with the assistance of the Mary Raftery Journalism Fund.