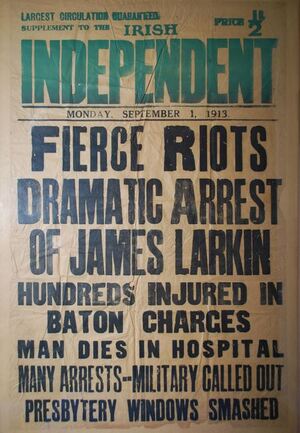 Social historian and author of Lockout: Dublin 1913, Padraig Yeates discussed the implications of the 1913 Lockout to The Irish Story in 2010.

This is what he said:

“My contention would be that the events of the Lockout and the peaks that took place during the Lockout were the nearest thing we had to an actual discussion or contest over what modern Ireland, 20th century Ireland, would be like in social and economic terms. The 1916 Rising produced the Proclamation (of Independence) and you had the Democratic Programme in the first Dáil but these were sort of handed down from on high. Similarly, if you look at the Treaty debate, that unfortunately revolved around the oath of allegiance to King George the 5th.

There’s very little in it about what sort of society they wanted. So the nearest thing you had to that was the Lockout where you had, if you like, reformist elements, like the suffragette movement, and socialists and trade union leaders generally arguing for a more secular, more pluralist and more equitable society, on one side and you had employers and the Catholic Church on the other side, arguing very much for the sort of society we ended up with for the most of the 20th century. So it was a very important event. Its main importance is the unspoken importance.

It was this sort of conventional myth created of a heroic sort of workers fighting British Imperialism, in all its manifestations including British capitalism, but being defeated in the end. There was a subliminal message there that really socialism and those sorts of ideas don’t really work. At the end of the day, the employers were right. They were a bit more hard-headed and bit more ruthless than they needed to be but they knew how the world worked. So there was a sort of comfortable myth there then that gave something to everybody. But I think the real story is the story of people like Dora Montefiore.

It’s a story of people, suffragettes, socialists, trade unionists who were trying to create a modern, secular, pluralist society in this country and were ground into dust. I think its importance is it set the agenda for post-independence Ireland. It was seen simply as a curtain raiser for 1916 and everything that followed. But, in real terms, it actually set the agenda for the independent Irish state that followed 1916. So far from being a curtain raiser it really was a curtain raiser and a curtain fall on the whole process. It pre-determined, to a large extent, the type of Ireland we were going to have in the 20th century.”