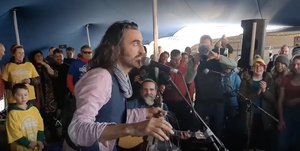 At a festival on Achill Island in Co Mayo, a storyteller is in full flight and, while channelling a vulgar barman character, drops an F-bomb and some swearing.

He then gets interrupted by young nine-year-old girl and told “watch your language”.

The story then adjusts and takes on a wild energy culminating in a raucus dance party.

The video was taken when Aindrias de Staic and The Latchikos at the Achill Pure Magic Wind Surf Festival last autumn.

Aindiras is on tour in Co Cork this week with his spoken word/storytelling  show The Man from Moogaga which won Best Radio Comedy at the Celtic Media Awards.

Next Friday, February 21, he’ll perform at the Linnenhall Arts Centre in Castlebar, Co Mayo. Tickets for all events at the door.

Meanwhile, Aindiras and The Latchikos will play Whelan’s in Dublin on February 27.