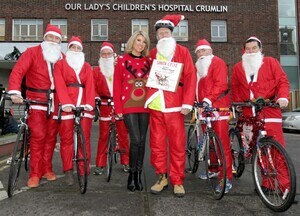 Don’t rest on your Laurels.

A bit of background to these guys first.

To date they’ve raised over €600,000 for CMRF by staging charity cycles from Galway to Dublin, 10k fun runs and now in it’s 2nd year, a cycle from the Phoenix Park to Clondalkin village via the city centre, passing by Crumlin Childrens hospital on the way, which is pretty good going for a local charity run by a group of dedicated people who’ve put all their time into this over the last few years.

It’s €30 to enter and that includes your Santa suit and a set of Christmas lights for your bike but feel free to pimp your bike up yourself as there’s a prize for the best decorated bike on the night.

It all starts from the Papal Cross in the Phoenix Park at 4pm and finishes up outside The Laurels pub in Clondalkin village at around 6.

This year, they’re also running a Santa Cycle in Cork if anyone wants to get involved down there.