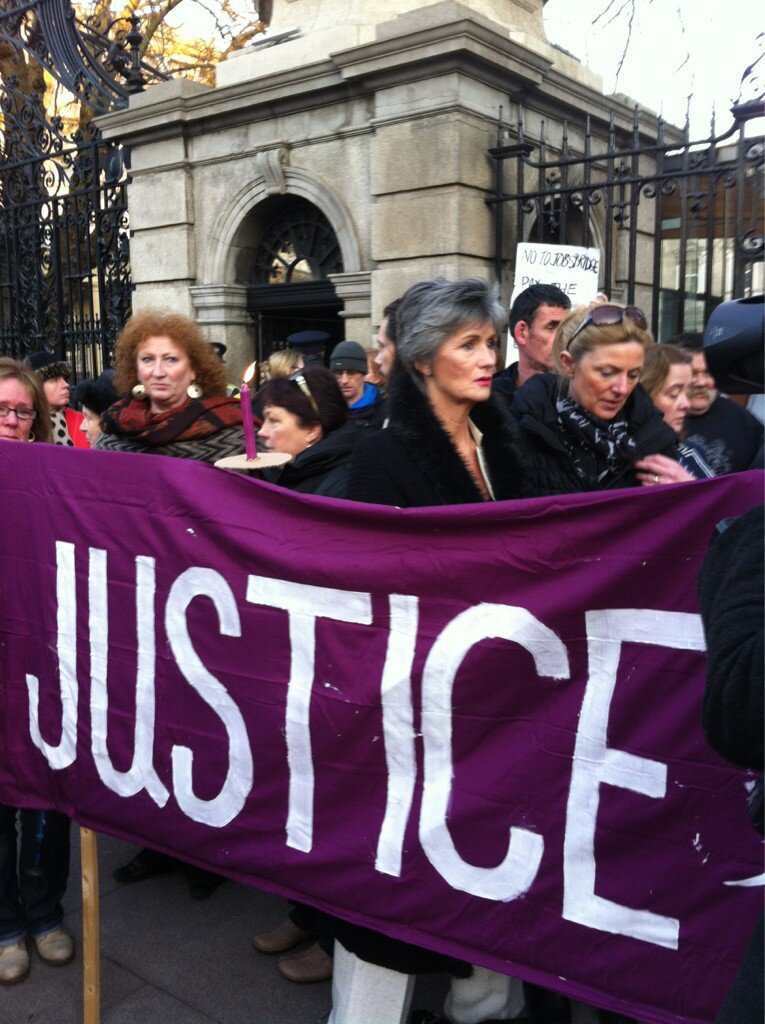 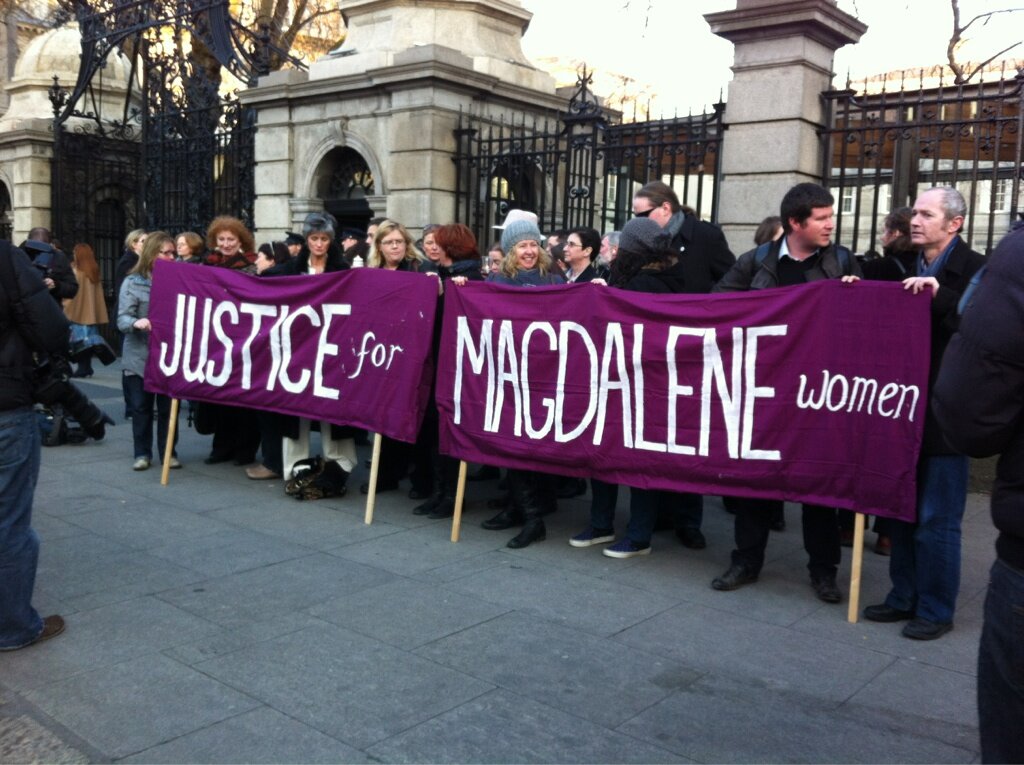 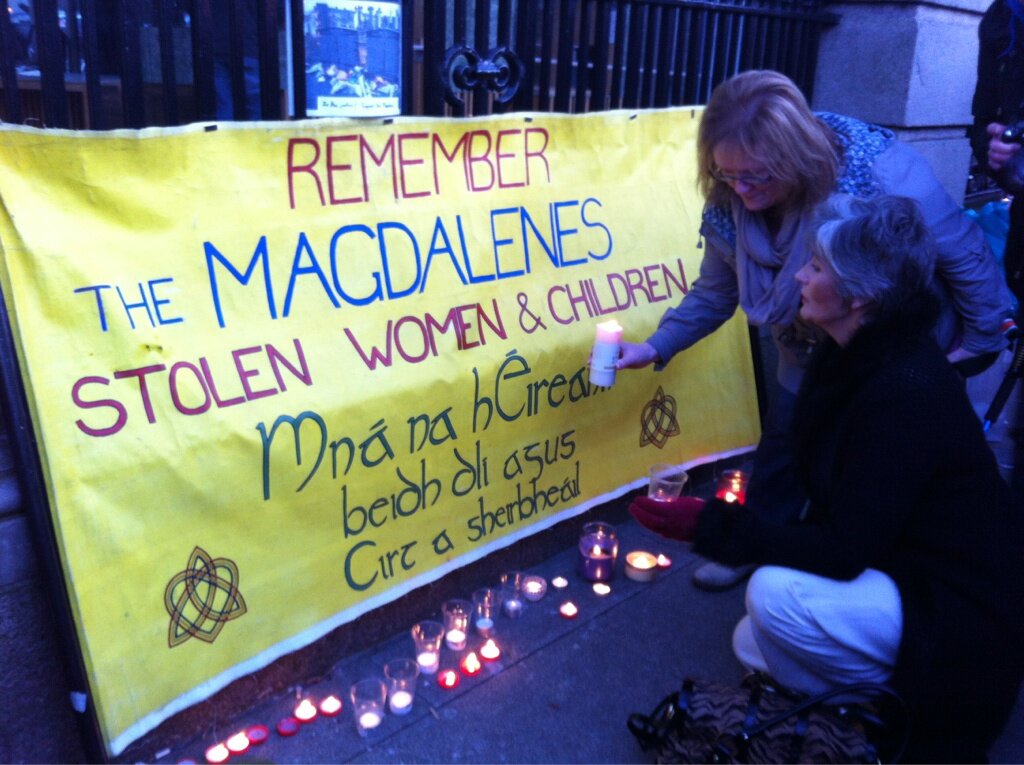 Justice for Magdalene protestors outside Leinster House moments ago as TDs begin debating the findings of the Magdalene Report.

Enda Kenny is expected to make an apology on behalf of the state to the women who were incarcerated at the laundries in the Dail chamber this evening. 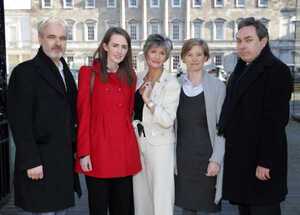 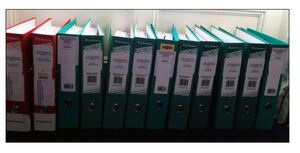 The many defenders of the report maintain that Martin McAleese did the best job he could, given the very narrow remit he was handed by the government.

But Mr McAleese frequently went outside his remit.

And not to the benefit of the women who worked in the laundries.

His remit-breaching culminated in Chapter 19, entitled Living and Working Conditions, which has three strands –  testimonies from the women who lived there, the religious orders who ran the laundries and others who would have witnessed the workings of the laundries, such as visiting doctors, priests, etc.

While Mr McAleese was under no obligation to carry out any of this work, what’s intriguing is what material ended up in Chapter 19.

The Justice for Magdalenes group carried out exhaustive research and gathered testimonies from the women, which ran to 800 pages (above).

But these lengthy first-hand accounts [see section at end of post], which included allegations of cruel mistreatment were not included in the report. Instead, there are quotations from survivors claiming no physical abuse took place at the laundries.

So why haven’t these women’s stories been published?

And of the testimonies it took It seems the Committee felt there was information circulating about the laundries which was factually unverified and took it upon itself to correct this based on the information which had come before it in the course of its work.

This was despite the fact that the information in question had not been compiled as part of a proper investigation into living and working conditions but rather in the context of giving women who wanted to share their stories a voice as outlined above.

It appears that the women who wished to tell their stories were those who voluntarily approached the Committee or were put forward by interest groups.

There is no reference to there having been any attempt on the part of the Committee to request stories from women in the laundries generally.

In the absence of this, presumably many women in the laundries would not have known of the facility to contact the Committee and tell their story about life within the laundry (particularly as the Committee’s official remit was confined to State involvement).

The Committee acknowledges that its investigation into conditions within the laundry is a story-telling exercise and incomplete and it says that, because of this, it is not going to make formal findings of fact.

However, in Chp 19, it does make formal findings of fact in particular that stated above, namely that life in the laundry was not as bad as life in reformatory schools and that the factual evidence before it contradicted other accounts of life in the laundry.

If these are not findings of fact, what are?

In addition, although Chp 2 and Chp 19 justify inclusion of living and working conditions on the basis of the entitlement of women to have their stories told and recorded by far the greater weight in Chp 19 is given to the stories of others, some of whom had very limited involvement with the laundry e.g. a novice who spent a week there and GPs and charity workers who visited very occasionally and were not there on a day-to-day basis.

But that’s for another day.

What The Magdalene Report Left Out (And In) END_OF_DOCUMENT_TOKEN_TO_BE_REPLACED