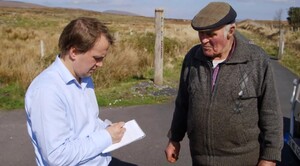 The Local Eye on RTÉ One at 7pm

The second episode of the documentary series focusing on local newspapers, The Clare Champion, The Mayo News and The Munster Express, all  thriving in the cyber age.

In tonight’s episode Mayo News editor Neill O’Neill has an unexpectedly emotional encounter with landowner Brendan Holmes from Tiernaur, who shares memories of his much missed mother and his father who, as he puts it, was “too lazy to catch the flu”.

Last week: “Who Won The Whist In Mulranney?”