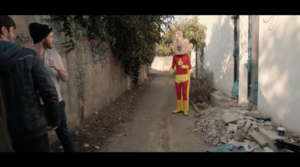 By Seamus Hanly, who writes:

Dennis [Seamus Hanly], a lonely and frustrated teenager, is reluctantly transformed into a superhero, embedded with the symbol of a hand showing its middle finger, and must awkwardly endure his training and save his world from extinction in this superhero parody.

The Middle Finger, which also stars Alison Spittle, Rose Henderson and Dave Duffy, will be available for viewing on Troma Now soon.

Read an interview with Seamus here