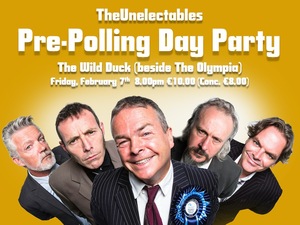 On the Eve of the General Election.

who else would you go see but…

In The Wild Duck, beside The Olympia, Dame Street, Dublin 2 tomorrow Friday, February 7 at 8pm.

Taking full advantage of the 24-hour pre-poll moratorium, Ireland’s finest down and going band present their own radical manifesto of mayhem to a noise-deprived and tune-hungry electorate.

Crowned Best Dressed Performers at The Electric Picnic (Irish Times), The Unelectables are an unlikely collection of former future rock stars, united only in their belief that punk is wasted on the young….

Includes Nick Kelly (not me).