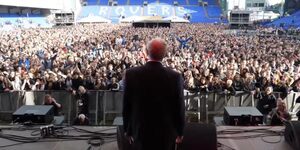 The irresistible spread of ‘Oh Jeremy Corbyn‘ to the chorus of Seven Nation Army by The White Stripes.

How The Labour Chant Started (The Guardian)

🎥 | The 'left liberal' Guardian's campaign against @JeremyCorbyn was as relentless as the right-wing Daily Mail & The Sun. Here's the proof: pic.twitter.com/HPOFNjjBgX