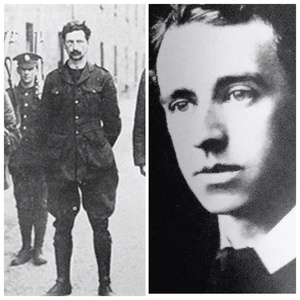 In 1916 Irish Volunteer Commandant Eamon De Valera had expressed concerns that a secret society was plotting a Rising to his senior officer Thomas MacDonagh.He complained that some of his men knew more about military activity than he did and demanded clarification.

MacDonagh told him he was correct and explained to de Valera how a rebellion was being planned by the Irish Republican Brotherhood through a secret military council working within the Irish Volunteers. MacDonagh held that this would take place at Easter.

De Valera was horrified, as a practising Catholic felt he could not be part of an oath bound society and threatened to resign his commission, but his concerns were eased by MacDonagh who held Catholicism should not be an issue and that by taking the oath to the IRB, de Valera could remain a Catholic if he chose. Swearing de Valera into the IRB, on the condition that his oath was ‘an empty political formula,’ and did not undermine his Catholicism,

MacDonagh was criticised by Eamonn Ceannt who asked him why he swore de Valera into the conspiracy. Almost prophetically MacDonagh noted ‘don’t you worry about De Valera…. He will come through as he always lands on his feet.’ MacDonagh would be shot at Kilmainham Gaol on May 3rd 1916, addressing the firing squad he lamented ‘I know this is a lousy job, but you’re doing your duty – I do not hold this against you’.

By contrast, as MacDonagh predicted, de Valera fell on his feet, spared from execution he would rise to dominate Irish politics for a generation as one of the most important and controversial figures in modern Ireland.