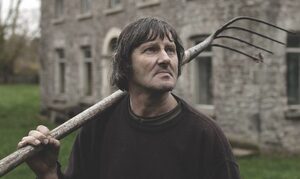 The Lonely Battle of Thomas Reid.

The ‘immersive’ documentery by Berlin-based Irish filmmaker Feargal Ward made its television premiere last night on RTÉ One.

The best thing I’ve seen on RTÉ in about ten years….

Previously: Reid All About It

This guy standing his ground. On his own.

Strangely occurs to me that a man can pretty much only stand up as such a hero, and turn down the millions placed before him, if not shackled by the demands of a woman!