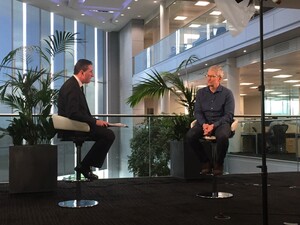 At the beginning of the interview Mr Cook talked about how Apple first set up in Ireland in 1980, how its workforce grew from 60 to 6,000 – before describing Apple’s relationship with Ireland as a “37-year-old marriage”.

“Like any marriage, you go through a pothole here, there, but we stuck together and we stuck together because we’ve always felt so close to the community there and to the people there. And every time I go, it’s just like a, it’s getting a shot of joy being there.”

From the rest of the interview:

Tim Cook: “Apple has always been about doing the right thing; never the easy thing. You know we had a very difficult thing in the beginning of this year with fighting the US Government over the privacy and security of our customer – that wasn’t easy to do but it was the right thing to do..”

Paschal Sheehy: “So, to you mind, has Apple done anything wrong here? Does Apple have anything to apologise for?”

Cook: “No. We haven’t done anything wrong and the Irish Government hasn’t done anything wrong. What we have done together is, you know, built a great relationship that is great for the community and, by the way, let me be very clear on this because I think there’s been a lot of misinformation and false information out there. We’re subject to the statutory rate in Ireland, of 12.5% – we paid $400million in taxes to Ireland in 2014 which is one of the years that is getting a lot of discussion. That, from our understanding, is about 1 out of every $15 of corporate taxes that were paid in the entire country and I understand there’s around 40,000 or so companies there and so we believe we’re the largest taxpayer there. And we’re proud to be. We very much want a great citizen in the communities that we live and work in.”

Sheehy: “Can I ask you so, some direct questions? Were you given deals that were only available to Apple and weren’t available to any other companies?”

Sheehy: “Were you treated differently to everyone else? Were you given special treatment? Or sweetheart deals?”

Sheehy: “And the European Commission yesterday [Wednesday] said, Commissioner Vestager said that, in 2014, Apple paid an effective corporate tax rate of 0.005% – that’s €50 out of every €1million profit you made at one of your subsidiaries, Apple Sales International which is based here in Cork. Do you accept this?”

Cook: “No, it’s a false number. I have no idea where the number came from, it is not true. Here is the truth: In that year, we paid $400million to Ireland and that amount of money was based on the statutory Irish income tax rate, of 12.5%. In addition to that, because our folks there, our 6,000 employees, do various functions for all of Europe, if we sold a product in another country, there was also, in addition to that $400million, income tax paid in that specific country, you know, dependent on what rate they charge.

And what’s even larger, in terms of the actual dollar value is, as you probably know, our worldwide profits are subject to additional US income taxes and the current US federal rate, which your viewers may be interested in, is 35% and we provisioned several billion dollars for US and so, when you sort of zoom out and look at this, I know there’s a lot of numbers and so forth, but here’s the way I would kind of describe it, at a summary level. In 2014, our worldwide income tax rate was 26.1%.

I recognise some people would hear that number and think it should be higher. I also recognise that some people hear it and think it should be lower. Others look at it and say, ‘hey that sounds about right. But I would like it to be paid to different countries or allocated to countries in a different manner to the way it is. I think, actually, discussions on all of those are fair discussions and reasonable people could agree and disagree on those. But I think we could all agree: that that conversations should be about future taxes, not retrospective taxes. The EU Commission’s overreach, in this regard, is unbelievable to us. We’ve never heard anything like it. It’s sort of like playing a sports game, winning a championship and then, later, finding out that the goals count differently than you thought they did.”

Cook: “You know, it lacks any level of fairness.”

Sheehy: “That comes to the crux of your difference with the European Commission and we’re probably not going to be able to resolve that there. So just, for a moment, leaving aside the legality of your tax arrangements, can we address the moral issue. You said there that, in 2014, you paid $400million in tax in Ireland, another $400million in the US, a total of $800million but given the billions of dollars in profits your company makes every year, do you regard this as Apple paying its fair share?”

Cook: “Let me correct something Paschal that you said that I think is very important. We paid the $400m to Ireland and we paid $400m to the US and we provisioned several billion dollars for the US, for payment as soon as we repatriated and, right now, I would forecast that repatriation to occur next year and so it’s not true that we paid just $400m or even just $800m. The number is materially larger…”

Cook: “The tax system itself is so complex. You could stack up paper from your floor to your ceiling and the tax code, you’d have to carve out, you’d have to blow out the ceiling to stack the tax rules up. This is not a system that we think is good and I think the bulk of the people in the world – even some of the people that wrote it – also don’t think it is. And so, the good news is there’s actually work going on that I now worry about, going forward. But there’s work going on that many countries have participated in to make this system simpler and more straight forward and I hope that that work goes forward.”

Sheehy: “Several politicians here in Ireland have said that there should be no appeal, that this is money which Apple owes to Ireland and this is money which is badly needed for public services like hospital beds and new schools or perhaps even paying the national debt here which is huge. What do you say to those people?”

Cook: “Well I think all those things, they’re very, very important for people. But  I think it’s very  important. First of all, it’s Ireland’s decision, it’s not mine but, from my point of view, if I were sitting there, here are things that I would think about: It’s clear, I believe to the Irish Government, because they’ve been very clear, it’s clear to us and it’s clear to the US officials as well, that have looked at this, that what was done was very consistent, that there were no special deals and so I think it’s important that, you know the Government stand strong on that because the future investment for business really depends on a level of certainty, a level of, you know, not where there’s floating laws, people need to know that the rule of law will be upheld. And so, where it might feel good for the moment, if you think about the long-term for the country or, broadly, the union, I think it’s very important to uphold these principles and not retroactively change them.”

Sheehy: “And what if the Government here decides that it’s not going to appeal the decision? For whatever reason, I’m not sure how up-to-date you are with developments here but we had a special meeting of the Cabinet today to discuss this issue. That Cabinet decided to defer the decision and will meet again on Friday [tomorrow]. And even prior to that Cabinet meeting, there were certainly hints that this decision and a decision on whether to appeal or not, may expose fault lines within the Irish Government here. And it’s not guaranteed that there will be a decision by the Irish Government to appeal this decision.”

Cook: “Yeah I look at it, much like I said before, is that: we’re very committed to Ireland. We’ve been committed for 37 years, we have a long-term romance together and I’m pretty confident that the Government will do the right thing. And I think the right thing here is to stand up and fight against this overreach and clearly the sovereignty of the country is at stake and the rule of law and the certainty of law is at stake and I think when those large values, those principles are at stake, we all have to stand up and fight for what’s right.”

Earlier: A Tax On Our Sovereignty

Anything Good In The New Yorker?

Previously:  This Is Not Complicated