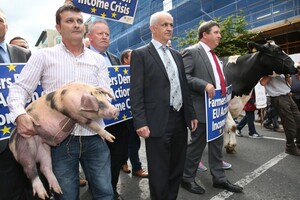 It follows reports that the IFA’s president Eddie Downey is to “step back from his role” as the organisation’s chief economist Con Lucey reviews the governance structures within the IFA.

From the interview this morning…

Tim O’Leary: “The best way to deal with this is through the process we put in place with the chief economist to look at it, to put a proper perspective on all these things. And to give him that space, this is, I’m reiterating, to give him that space, Eddie felt it was best to step back and not be involved in the process. We have a renumeration committee of which it is a part so that would be the body, dealing with the salary and that needs space to do this properly.”

Jennings: “He resigned over his own salary?”

O’Leary: “The size of it. The scale of it, the difficulties…pardon?”

Jennings: “Or the revelation of it?”

O’Leary: “He resigned before it was revealed. So that was the issue that was bothering farmers. It was becoming a huge issue and it was getting in the way of us doing our business.”

O’Leary: “He was..no. The salary was not revealed before he resigned. It was the size of it and it was the concern over the size of it, or the potential size of it. Remember what was happening. There were leaks and there was speculation and there was talk about what was the size of the salary and we had to, or he had to move to deal with this. And it is distracting us from the work of the organisation. I accept completely that this is important stuff now, to be dealt with. And we’re going to deal with this and we’re going to work through it.”

Jennings: “Who signed off? Who agreed to pay the IFA general secretary over half a million euro in 2013? And just below that last year?”

O’Leary: “The general secretary of the Irish Farmers’ Association was hired by the organisation and a package was agreed with him. The package at that time would have been agreed by the president and the treasurer and I think that was in 2009. And in subsequent years, that salary would have been reviewed on an annual basis and signed off by the president, the treasurer…”

Jennings: “And was it signed off in…”

O’Leary: “That was signed off in 2013 by the then president, the then treasurer. Now in 2014, we received a letter from Con Lucey expressing concerns about the procedures and the structures in place which we took on board and that salary was not signed off in 2014.”

O’Leary: “Because we wanted to strengthen the oversight of the bonuses and the salary going forward. So until that was done, we were not prepared to do that. This is accountability if you want to call it that or this is the way we felt we had to work here.”

Jennings: “Will Pat Smith get a payoff? A severance package?”

O’Leary: “There is very strong law here to govern and protect employees and we’re bound by that law. It’s in the process at the moment and we’re having some difficulties with that. But I think this is a confidential process…”

O’Leary: “No this is a confidential process that has to be worked through now and we have to, in fairness, to everybody, we have to work through this and when we have arrived at a settlement it will be made known.”

Jennings: “Will you tell members what his payoff will be?”

Jennings: “When did you first learn, as an IFA member, what your general secretary was earning?”

O’Leary: “When we heard, when we decided that we were going to reveal this or we were going to explain this to the executive council, we got very clear figures at that stage from our Chief Financial Officer so…”

Jennings: “When was that?”

Jennings: “So you… only last week you found out that your general secretary was earning half a million euro?”

Jennings: “What did you think he was earning?”

O’Leary: “The common expectation or the common understanding was that he would be benchmarked off the secretary general of the Department of Agriculture…”

Jennings: “So were you shocked?”

Jennings: “There were members, also last night, who are expressing a little surprise over what Eddie Downey was being paid. Did you know what he was being paid?”

Jennings: “So you only knew that last week?”

Jennings: “What did you think he was earning?”

O’Leary: “I would have expected he’d have been on a pretty good salary, I didn’t speculate on that. I’m on €35,000 a year, I didn’t negotiate that, that was the package offered to me when I came in. I’m a dairy farmer, that is sufficient for me, to pay a replacement labour on my farm. So, ok, that allows me then to do the job that I do for the Irish Farmers’ Association. It’s practically a full-time job, I tell you, it’s a job and a half these days. But it’s practically a full-time job to do this. So I left my farm to do this and that allows me to do so.”

Jennings: “You don’t need me to tell you there are farmers up and down the country who are, I think it’s fair to say, livid that the general secretary was earning over half a million euro in the year before the crisis was earning less than half a million euro last year. Some of them will be pretty annoyed that a president was earning nearly €150,000 this year and last year. What would you say to them this morning? Many of whom are threatening to withdraw their membership. And are also questioning whether they should continue to pay fees for every transaction they undertake.”

O’Leary: “Yes, well, what I’d say to them first of all, on behalf of the organisation, I apologise for the mistakes we’ve made in that area, I think we are now going to review everything again. We’re going to look at these payments, through the renumeration committee, that’s what this strengthened committee is set up to do, to look at the payment of the general secretary and the stipend of the president and make recommendations on that and we will do that and we will do that in the light of current circumstances, I think is the best way to describe it. And I cannot take responsibility for the decisions of others in the past but what I can do is give a commitment on behalf of myself and the executive board and the executive council at the Irish Farmers’ Association that we will have transparency and accountability going forward, into the future now. We do everything by the book, as everything that needs to be done, we will do it. And we will be guided on that, Gavin, by Con Lucey.”

Jennings: “Will you go into it with the same level of eyes closed as you did before? When you weren’t questioning how much your boss or your president was earning?”

O’Leary: “I’m in this position two years. Before that, I was not an honorary, a national honorary officer…”

Jennings: “Weren’t you curious about what your boss was earning? No?”

And I’ll be very honest with you here Gavin, the bulk of the time I’ve spent in this organisation, the vast majority of it up to this, all of it has been taken up with dealing with this issues and I want to get back to dealing with those issues and I think that we won’t let our members down. We will keep doing this, we will serve our members and we will represent our members on every facet of agriculture that needs to be done so we will deal with this issue. This is another problem we have to deal with. We are good at solving problems in the Irish Farmers’ Association. We solve this one and we will get on with the business and we will get our organisation back on track. That is the clear decision of the executive board yesterday and I’m going to carry that out.”