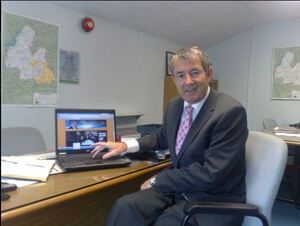 And why not – sure isn’t he a local man?

Michael Lowry gave an exclusive interview to the Tipperary Star about that transcribed phone call.

It was published on Wednesday and is now on their website:

Things that may make you go hmm.

Deputy Lowry said this week, “The Register at the UK Land Registry and company records clearly show that I never had any direct or indirect shareholding or beneficial interest in Doncaster Rovers or it’s associated companies.”

“The Holycross man also confirms that he never had any material or beneficial interest in ‘Glebe Trust” – an entity which owned Westferry – a company which had been set up by Mr Phelan and later sold to [Denis] Mr O’Brien to facilitate the purchase of the Doncaster Rovers site – that site was very recently the subject of a sale agreement in a joint venture with Doncaster Council, involving a sum reported to be in the region of St£10m…”

The Sunday Independent had kept watch at Deputy Lowry’s home in Holycross and at his constituency office in Abbey Road, Thurles on Saturday in a bid to put a series of questions to him. And, attempts had been made through close political allies to contact him in order to arrange an interview.

All of these efforts proved fruitless with the Independent stating that the only place Deputy Lowry could be found was in the pages of The Tipperary Star.”