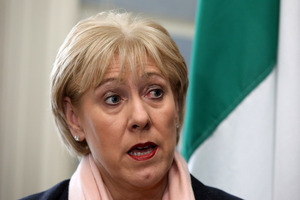 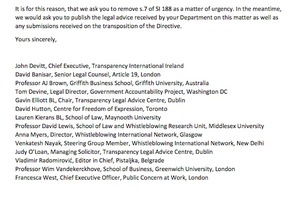 An open letter to the Minister for Business, Enterprise and Innovation, Heather Humphreys calling on her to withdraw an amendment to Ireland’s whistleblower law which, claim the signatories, could lead to workers facing legal action or criminal prosecution and allow businesses to stop their employees from reporting fraud and corruption to the regulators and the Gardaí.

The amendment has been made under the EU Protection of Trade Secrets Regulation and has recently been introduced by Minister Humphreys to transpose the EU Trade Secrets Directive. The regulation amends Ireland’s Protected Disclosures Act 2014 (PDA) to require whistleblowers to show they were motivated by the general public interest, even if they report a crime to the relevant authorities and their allegations are true.

‘”his represents the single-most significant set-back for the fight against white-collar-crime in a decade. Banking and private healthcare whistleblowers are now going to think twice about coming forward.

Requiring a whistleblower to show they were motivated by the general public interest means that many whistleblowers will be expected to show that their motives were pure, that they bore no ill-will towards their colleagues or that they were the ideal employee.

Lawyers for rogue employers or trade-secret holders will inevitably question the whistleblower’s character to show that they were motivated by malice or self-interest’.”