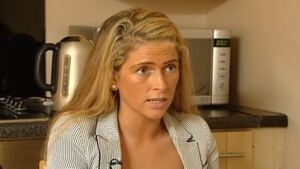 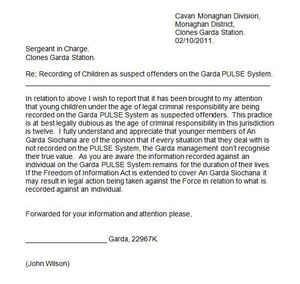 [Top: Caroline Dunne in an interview broadcast on Tonight With Vincent Browne last night and, above, Garda whistleblower John Wilson’s 2011 complaint about the profiling of children on the Garda PULSE system]

They discussed the matter of Traveller children being placed on PULSE and being given criminal intelligence numbers – some allegedly as young as 16 days old.

It followed Ms O’Doherty’s story in The Sunday Times in which she told how the two children of Caroline Dunne, a Traveller who lives in Cork, were placed on the PULSE system after Ms Dunne went to a garda station to get passport forms signed in 2011.

Ms Dunne’s children, Francis and Mary, were aged two and one at the time. Ms Dunne first learned about her children being on PULSE when Ms O’Doherty told her at the weekend.

Caroline Dunne: “When I got told this, I’ll be honest with you, I couldn’t believe it. I was more in shock than anything else. The person, like, the person that informed me, she actually had to repeat three or four times to me, I did not know what she was on about. This kind of information on this thing about my kids, it just, I was shocked to be honest about it, I was. To think that the guards could do something like this, if you can’t trust the guards, who can you trust? And to put something like this, up on the PULSE system about a baby, my little girl at 13 months old? She was barely walking, barely talking, still in nappies and to put information on the PULSE system about my baby is just totally wrong, it’s a disgrace.”

Lisa-Marie Berry: “How does it make you feel, as a mother?”

Dunne: “It makes me extremely angry, really, really angry to think that someone was spying on my kids, holding information about my kids on the PULSE system. To think that could happen to kids, it’s just a disgrace at this day and age, the 21st century, it’s just not right, it’s not on. And they’re talking about Travellers, discrimination, like this is discrimination against Traveller kids. They’re not going to make it nowhere if this keeps on continuing, it has to stop, it has to be taken down. But can it be taken down?”

Berry: Can you think of any reason why the gardaí would keep such intelligence on your children?

Dunne: “They have no right to put something like that on a PULSE system, no right and that goes for every Traveller child that, every settled child that’s out there, they have no right to do that to them. Whatever anyone else surrounding them or their dad, or anything like that has done in the past, that doesn’t concern my kids, that has nothing got to do with, they’re only kids at the end of the day. Yes they are Traveller kids, whatever, but they’re discriminating them there to be honest about it. If someone say, out of Dublin 4 went into a local garda station to get their family’s passports signed would they be put on the PULSE system? That’s what I would like to know. Why my kids or why any other Traveller child? Why had they to be put on this?”

Dunne: “For an explanation, to why my two kids have been put on to this PULSE system and can they be taken off it? And I’m calling on a meeting to meet with the Minister for Justice, to meet in the Dáil on Thursday to give me an explanation why this has happened to two kids.”

Later host Vincent Browne read out a statement from the gardaí, saying:

“There is no restriction on the minimum age for recording a person’s details on PULSE. This is due to the fact that persons both adult and children, of all ages, may be subject to garda investigation – either as a victim, a witness, a potential suspect of crime or as an injured party as a result of an accident.”

“And when you just go through that, they’re saying that it’s legitimate to put the details of a child on PULSE if they are a victim of a crime, well in this instance they weren’t; a witness, well neither of them looked as though they would be witnesses to a crime; a potential suspect of a crime, how could they be potential suspects of a crime?; or as an injured party as a result of an accident, they weren’t that. So what was the reason for it? This is more of the carry-on that goes on.”

Browne: “The Data Protection Commissioner Billy Hawkes said that he could not comment on this particular case as no complaint has been received in relation to the matter. As a consequence, he’s not in a position to assess whether any issues arise from the Data Protection…”

Martin Collins (Pavee Point): “Can I just clarify that. These rumours in relation to the PULSE system have been swirling around now for a number of months, at least three or four months. My organisation, not me personally but my colleagues at Pavee Point actually met GSOC [Garda Síochána Ombudsman Commission] and the Data Protection Commissioner’s Office on this very issue. So it has been brought to their attention. We’re awaiting a response.”

Browne: “Was there a complaint made?”

Browne: “Are you sure there was a complaint made?”

Collins: “Yes, well I understand, from speaking to my colleagues this evening, that yes, a complaint has been made. There was a discussion certainly with the Data Protection Commissioner’s Office and GSOC but in relation to the Data Protection Commissioner’s Office that was a discussion and then subsequently in, it was indicated to them that yes, an official complaint has been made.”

Browne: “And when you went to GSOC what happened?”

Collins: “Yes well they heard the case, our arguments, and we’re awaiting a response.” 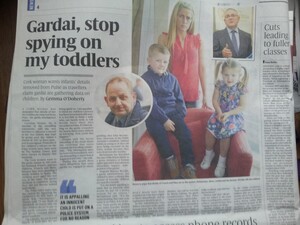 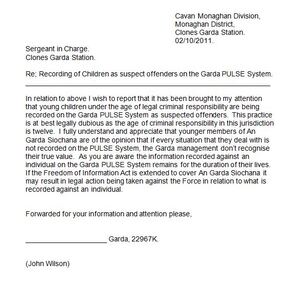