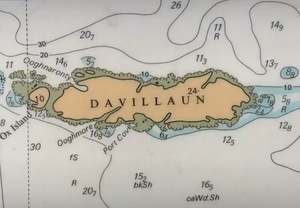 🚨New Podcast Alert🚨
A 400-year-old mystery wrapped inside a riddle with a large measure of adventure on top! 🗺 Treasure Island: The Hunt for The Falcon Blanco ep 1 airs at 6:30pm on @drivetimerte & is available to stream wherever you get your podcasts 📲 #FalconBlanco pic.twitter.com/zSQAfy4pDd

A mystery wrapped inside a riddle with a large measure of adventure on top…Journalist Philip Boucher-Hayes has spent a year investigating if the wreck of a Spanish Armada galleon lies off the coast of Inishbofin for a new original podcast series for RTÉ.

Over six episodes, Philip brings listeners with him as he investigates claims that a dive expedition 50 years ago located the wreck of the Falcon Blanco off Inishbofin.

The divers were commissioned by an enigmatic civil servant who had made a life’s study of the location of the Falcon Blanco, believing it to be a pay-ship of the Armada, with untold wealth on board. But their accounts of what they did or didn’t find on the sea bed are at odds with the accounts of other witnesses.

The first episode of Treasure Island: The Hunt for the Falcon Blanco will be broadcast on Drivetime on RTÉ Radio 1 tonight at 6.30pm.

The first four episodes of the podcast are available now wherever you get your podcasts and the final two episodes “will be released at a later date”.